The History of Emancipation Day in Charleston 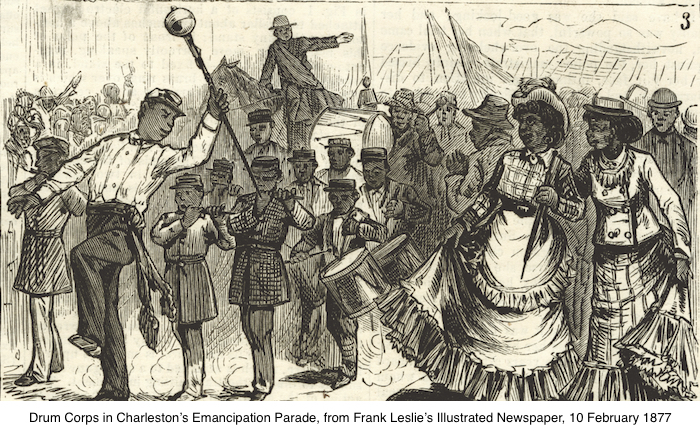 Most everyone in these United States recognizes the first day of January as New Year’s Day, but that’s not the only holiday being celebrated in our community on this date. Since 1866, the people of Charleston have celebrated the first of January as Emancipation Day—a holiday that includes a parade, orations, religious services, and feasting. If you’re not familiar with this event, it’s well worth your time to learn a bit more. It’s one of Charleston’s oldest public celebrations, and one that everyone should acknowledge and applaud. In fact, I believe Charleston’s annual celebration of Emancipation Day is a unique phenomenon that deserves national recognition.

Emancipation Day is a holiday observed on the first day of January to commemorate the signing of the Emancipation Proclamation. The Proclamation, which President Abraham Lincoln issued on January 1st, 1863, ordered the immediate emancipation, or freedom, of all enslaved people living in territories controlled by the Confederate States of America. This executive order did not apply to enslaved people living in the United States, north of the boundaries of the Confederacy, however. Those people had to wait until 1865 to enjoy their freedom. In effect, therefore, the Emancipation Proclamation of 1863 freed a very small number of slaves in Southern areas captured by the Union Army, like Beaufort, South Carolina. More importantly, however, the Proclamation effectively shifted the moral mandate surrounding the Civil War from a fight to maintain the federal union to a fight to eradicate the institution of slavery. More than anything, the Emancipation Proclamation was a powerful rhetorical gesture, an executive order committing the collective might of the United States to the cause of ending the practice of slavery.

The people of Charleston, deep in the heart of the Confederacy, learned about President Lincoln’s Emancipation Proclamation by mid-January 1863 by way of telegraphic news relays. The proclamation was a symbolic gesture, freeing enslaved people in places like Charleston, but the Confederate authorities controlling our community at that time willfully ignored the orders of a man they considered to be a foreign tyrant. In short, there were no emancipation celebrations in Charleston on January 1st, 1863. Enslaved people here might have heard about the proclamation a few weeks after its debut, but they were not yet in any position to assert or enjoy their freedom.

Freedom first came to the enslaved people of Charleston in February 1865, when the Union Army occupied the city and then spread throughout the rest of the county. Within the first year of post-war freedom, Charleston’s African-American community organized three large public celebrations. First, on Tuesday, March 21st, 1865, thousands of newly-freed African Americans paraded through the streets of Charleston in a massive, jubilant celebration of the “death of slavery.” Several weeks later, on the first of May, a more somber parade led to a pastoral site on the city’s north side, where formerly-enslaved people decorated the graves of fallen Union soldiers. Finally, on the first day of January 1866, Charleston’s black community staged a day of festivities in commemoration of the third anniversary of President Lincoln’s Emancipation Proclamation. This event was the first observance of its kind in Charleston, and it proved to be the cornerstone of an enduring tradition.

In the years immediately after the Civil War, many communities in the United States, most especially those in the southern states, held annual Emancipation Day celebrations. Many towns and cities, including Columbia, Greenville, Georgetown, Spartanburg, Beaufort, Sumter, Chester, and Savannah, observed January 1st as their annual day of jubilation. Other places, including several communities in Virginia and Washington D.C., celebrated Emancipation Day in mid-April, to commemorate the death of Abraham Lincoln. Still other communities, in Texas and in many mid-western locales, celebrated June 19th, or “Juneteenth,” as their anniversary of emancipation. In Charleston, however, we have consistently observed January 1st as Emancipation Day since 1866.

Throughout the South, enthusiasm for celebrating emancipation and the promise of a bright future was at its zenith in the immediate aftermath of the Civil War. The political and legal atmosphere of the Reconstruction era brought new rights and opportunities to the black community, but the bubble burst in the late 1870s. As the Federal government allowed members of the old regime to reassert control over local politics, the rights and liberties of black citizens quickly withered. In many communities across the South, annual public celebrations of Emancipation began to disappear. White oppression in the era of Jim Crow caused many African Americans in the South to conduct their commemorations in private situations, or simply in the context of church services.

It may surprise many listeners to learn that one of the principal features of the early Emancipation Day events was the colorful appearance of the local units of the South Carolina militia. In the wake of the Civil War, Federal authorities oversaw a complete reorganization of the militias in the Southern states, and in the spring of 1869 the old South Carolina Militia became the new South Carolina National Guard. For more than a decade after that transformation, our local National Guard was composed almost exclusively of black citizen-soldiers. Following the end of Reconstruction in the late 1870s, the South Carolina National Guard included both black and white men, organized into segregated units. In 1905, our state dramatically reduced its number of Guard units, in compliance with a Federal law of 1903, and the standing black companies of the South Carolina National Guard were disbanded. Between 1870 and 1905, each of Charleston’s Emancipation Day parades included hundreds of uniformed black soldiers. Their presence, organized into distinct companies and marching with practiced discipline, literally set the pace for the annual parades and imbued the scene with a strong sense of patriotic pride.

Looking back at newspaper accounts of Charleston’s Emancipation Day festivities in the years after the state disbanded the black militia units in 1905, it appears that the annual parades lost a bit of steam without the military presence. The Emancipation Association stepped up to fill the void, however, and the annual commemorations continued unabated. After 1905, the parades became more civic oriented, with women and school children playing increasingly important roles. For example, the Jenkins Orphanage band stepped in to fill the shoes of the old militia bands. After World War II, this famous orphanage band morphed into the Burke Industrial School Band, which eventually became the Burke High School Band. To the present day, the Burke band has proved to be the backbone of the annual Emancipation Day processions.

On January 1st, 2019, the people of Charleston will observe the 156th anniversary of the Emancipation Proclamation with a series of events, including a parade, orations, and church services. These activities represent the 152nd consecutive observance of this holiday in Charleston. Whatever the color of your skin, this event is a big deal and is worthy of your attention. Besides commemorating an event of monumental importance in our nation’s history (to wit, the end of slavery), Charleston’s annual Emancipation Day celebration is a unique phenomenon. I’ve done a lot of searching through old newspapers on a mission to prove two things, and here’s what I can tell you: First, I can positively confirm that there has been a public celebration of Emancipation Day in Charleston every year since 1866 (although the street parades were suspended during World War II, 1942–45). Second, I’m almost positive (but still to conduct a bit more research) that no other community in the United States, besides Charleston, has sustained an annual tradition of commemorating Emancipation Day since the Civil War. Other cities and towns and villages have held Emancipation Day events, to be sure, but none appear to be as continuous or as old as the Charleston tradition. And while a few churches might claim to have held Watch Night and Emancipation Day services since the end of slavery, the Charleston celebrations I’m talking about have been very much public events since 1866, literally taking over the city’s streets and reported in the local newspapers. 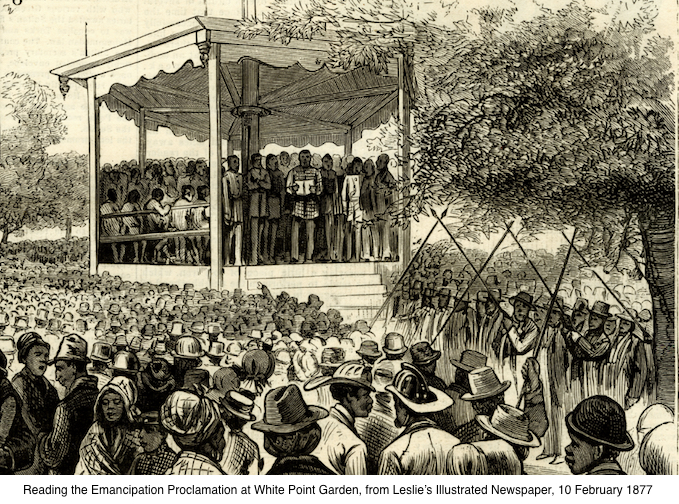 In the coming years, I think you’ll be hearing more about Charleston’s Emancipation Day celebrations as the world learns more about our community’s unique heritage. For the moment, however, let’s celebrate the present and the freedoms we will enjoy in the New Year. This year’s parade starts at 11 a.m. on January 1st, 2019, at Burke High School on Fishburne Street. The bands, floats, and revelers will then wind their way down King Street, from Sumter Street to Calhoun Street, then disband in front of Mother Emanuel AME Church. Why not take a few minutes out of your holiday to visit the parade route and lend a cheer? Take a few photos, share them with friends and family, and spread the word. In our nation’s long and often troubled history, what anniversary is more fitting for a jubilant celebration on New Year’s Day?