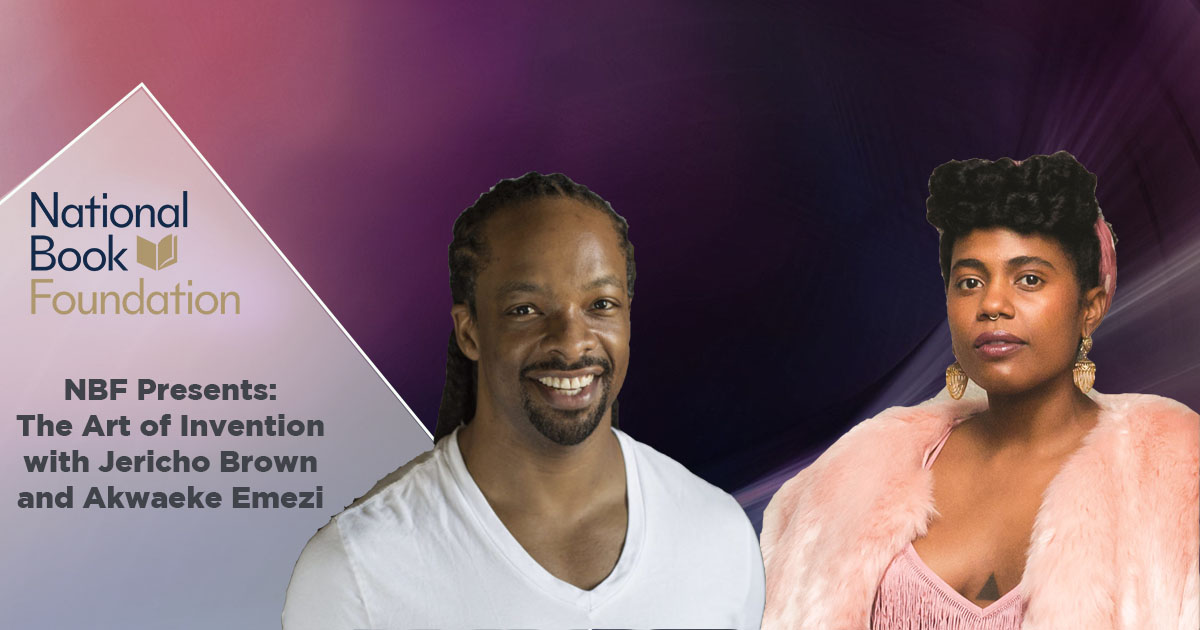 Main Library - To kick off the spring season of NBF Presents, join 2019 National Book Award Finalists Jericho Brown, author of The Tradition, and Akwaeke Emezi, the author of Pet, for a discussion on breaking convention to create brand-new forms, worlds, and hybrid genres, and what disruption and invention means for the future of literature. The event will feature brief readings, a moderated conversation, and question-and-answer session followed by a book signing with Blue Bicycle Books.

This program is presented by the National Book Foundation and Charleston County Public Library, in partnership with Black Ink Book Festival, and is free and open to the public.

If you are interested in attending, please RSVP online.

Jericho Brown is the recipient of a Whiting Writers’ Award and fellowships from the John Simon Guggenheim Foundation, the Radcliffe Institute for Advanced Study at Harvard University, and the National Endowment for the Arts. Brown’s first book, Please (2008), won the American Book Award. His second book, The New Testament (2014), won the Anisfield-Wolf Book Award and was named one of the best of the year by Library Journal, Coldfront, and the Academy of American Poets. He is also the author of the collection The Tradition (2019), which was nominated for the 2019 National Book Award. His poems have appeared in Buzzfeed, The Nation, The New York Times, The New Yorker, The New Republic, Time, and The Pushcart Prize Anthology, and several volumes of The Best American Poetry anthologies. He is an associate professor and the director of the Creative Writing Program at Emory University in Atlanta.

Akwaeke Emezi made their young adult debut with Pet (Make Me a World/Random House Children’s Books), a Finalist for the 2019 National Book Award for Young People’s Literature. An honoree on the National Book Foundation’s “5 Under 35” list, a longlist nominee for the Carnegie Medal for Excellence, and a shortlist nominee for the Center for Fiction’s First Novel Prize, Akwaeke continues to receive accolades for their adult debut, Freshwater. The autobiographical novel also received rave reviews from The New York Times, The Wall Street Journal, The New Yorker, and Los Angeles Times, among others, as well as starred reviews from Library Journal and Booklist. Their sophomore adult novel, The Death of Vivek Oji, is forthcoming in 2020 from Riverhead Books.