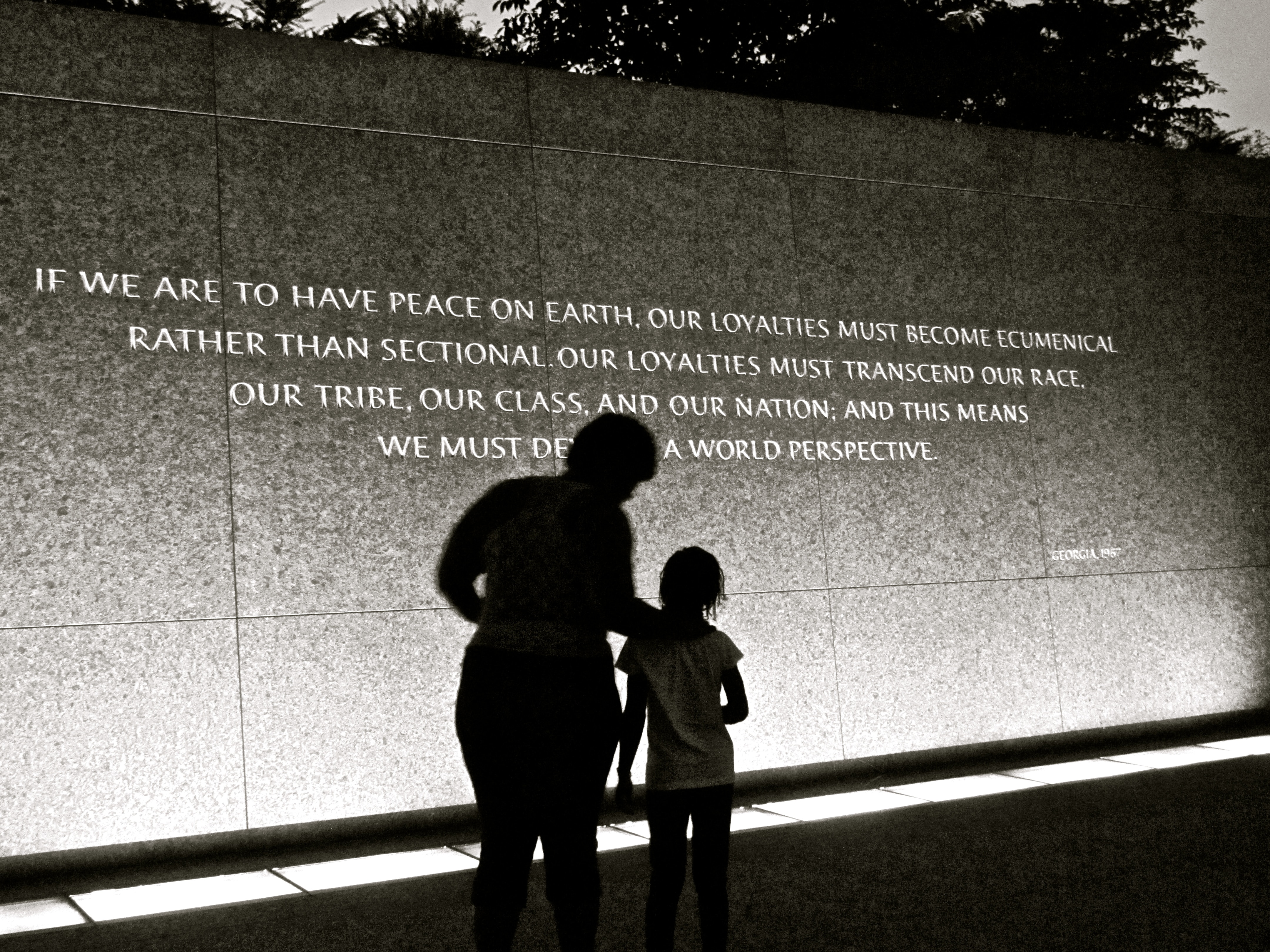 In 1994, the holiday was recognized as a national day of service where groups work in communities across the country work together to make a difference. The holiday is celebrated on the third Monday in January each year, which ranges from January 15 and January 21. King was born on January 15, 1929.

The titles in this list were put together by CCPL's own selectors who make decisions on the titles that fill book shelves in every branch. There' something for all ages in the list, too! Each title is linked to the catalog to make it easy to place holds.

For Everyone by Jason Reynolds

Originally performed at the Kennedy Center for the unveiling of the Martin Luther King Jr. Memorial, and later as a tribute to Walter Dean Myers, this stirring and inspirational poem is New York Times bestselling author and National Book Award finalist Jason Reynolds's rallying cry to the dreamers of the world. Jump Anyway is for kids who dream. Kids who dream of being better than they are. Kids who dream of doing more than they almost dare to dream. Kids who are like Jason, a self-professed dreamer. In it, Jason does not claim to know how to make dreams come true; he has, in fact, been fighting on the front line of his own battle to make his own dreams a reality. He expected to make it when he was sixteen. He inched that number up to eighteen, then twenty-five years old.. Now, some of those expectations have been realized. But others, the most important ones, lay ahead, and a lot of them involve kids, how to inspire them. All the kids who are scared to dream, or don't know how to dream, or don't dare to dream because they've NEVER seen a dream come true. Jason wants kids to know that dreams take time. They involve countless struggles. But no matter how many times a dreamer gets beat down, the drive and the passion and the hope never fully extinguish--because just having the dream is the start you need, or you won't get anywhere anyway, and that is when you have to take a leap of faith and ... jump anyway.

Justyce is a good kid, an honor student, and always there to help a friend--but none of that matters to the police officer who just put him in handcuffs without cause. When faced with in justice, Justyce looks to the teachings of Dr. Martin Luther King Jr. for answers. But do they hold up anymore? He starts a journal to Dr. King to find out. Then comes the day Justyce and a friend spark the fury of an off-duty cop. Words fly, shots are fired, and the boys get caught in the crosshairs. But in the media fallout, it's Justyce who is under attack.

I Have A Dream by Kadir Nelson

From Dr. Martin Luther King, Jr.'s daughter, Dr. Bernice A. King- "My father's dream continues to live on from generation to generation, and this beautiful and powerful illustrated edition of his world-changing "I Have a Dream" speech brings his inspiring message of freedom, equality, and peace to the youngest among us-those who will one day carry his dream forward for everyone."

On August 28, 1963, on the steps of the Lincoln Memorial during the March on Washington, Martin Luther King gave one of the most powerful and memorable speeches in our nation's history. His words, paired with Caldecott Honor winner Kadir Nelson's magnificent paintings, make for a picture book certain to be treasured by children and adults alike. The themes of equality and freedom for all are not only relevant today, 50 years later, but also provide young readers with an important introduction to our nation's past. Included with the book is an audio CD of the speech.

The Cart That Carried Martin by Eve Bunting

"The strength and spirit of Dr. Martin Luther King, Jr. permeates this picture book about the funeral of Dr. King in Atlanta, Georgia, in 1968. Quiet, yet affecting, THE CART THAT CARRIED MARTIN is a unique tribute to the life of a man known world-wide for his outstanding efforts as a leader of the African-American Civil Rights Movement. Eve Bunting focuses on the funeral procession of Dr. King, beginning with the two men who found the cart to carry him through the streets of Atlanta. After painting it green, two mules named Belle and Ada are hitched to the cart where Dr. King's coffin is placed. Tens of thousands of mourners gather as the cart makes its way to Ebenezer Baptist Church, and then past the Georgia state capitol to Morehouse College. All the while, crowds of people pay their respects by singing songs of hope. Bunting's thoughtful, well-chosen words, coupled with Don Tate's soft colors provide the reader with a sense of hope and reverence, rather than the grief and despair one might expect.

"If there is one book Martin Luther King, Jr. has written that people consistently tell me has changed their lives, it is Strength to Love." So wrote Coretta Scott King. She continued: "I believe it is because this book best explains the central element of Martin Luther King, Jr.'s philosophy of nonviolence: His belief in a divine, loving presence that binds all life." That insight, luminously conveyed in this classic text, here presented in a new and attractive edition, hints at the personal transformation at the root of social justice: "By reaching into and beyond ourselves and tapping the transcendent moral ethic of love, we shall overcome these evils."

In these short meditative and sermonic pieces, some of them composed in jails and all of them crafted during the tumultuous years of the civil rights struggle, Dr. King articulated and espoused in a deeply personal compelling way his commitment to justice and to the intellectual, moral, and spiritual conversion that makes his work as much a blueprint today for Christian discipleship as it was then.

Nine Days: The Race To Save Martin Luther King Jr.'s Life and Win the 1960 Election by Stephen Kendrick

Less than three weeks before the 1960 presidential election, thirty-one-year-old Martin Luther King, Jr. was arrested at a sit-in at Rich's Department Store in Atlanta. That day would lead to the first night King had ever spent in jail--and the time that King's family most feared for his life.

An earlier, minor traffic ticket served as a pretext for keeping King locked up, and later for a harrowing nighttime transfer to Reidsville, the notorious Georgia state prison where Black inmates worked on chain gangs overseen by violent white guards. While King's imprisonment was decried as a moral scandal in some quarters and celebrated in others, for the two presidential candidates--John F. Kennedy and Richard Nixon--it was the ultimate October surprise: an emerging and controversial civil rights leader was languishing behind bars, and the two campaigns raced to decide whether, and how, to respond.

Stephen and Paul Kendrick's Nine Days tells the incredible story of what happened next. In 1960, the Civil Rights Movement was growing increasingly inventive and energized while white politicians favored the corrosive tactics of silence and stalling--but an audacious team in the Kennedy campaign's Civil Rights Section (CRS) decided to act. In an election when Black voters seemed poised to split their votes between the candidates, the CRS convinced Kennedy to agitate for King's release, sometimes even going behind his back in their quest to secure his freedom. Over the course of nine extraordinary October days, the leaders of the CRS--pioneering Black journalist Louis Martin, future Pennsylvania senator Harris Wofford, and Sargent Shriver, the founder of the Peace Corps--worked to tilt a tight election in Kennedy's favor and bring about a revolution in party affiliation whose consequences are still integral to the practice of politics today.