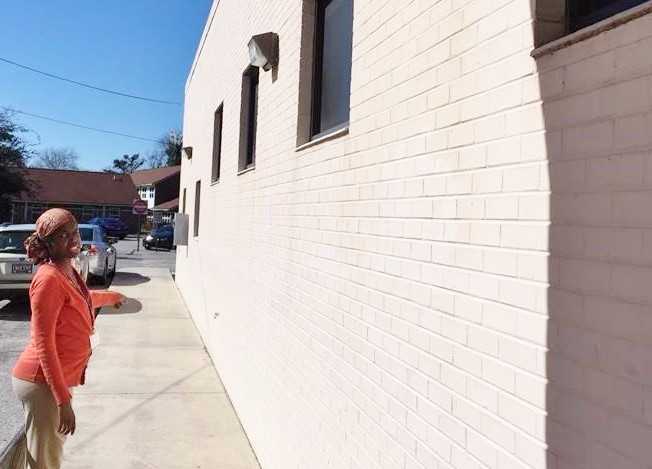 CHARLESTON, S.C. — A world renowned artist is painting a colorful, wall-sized mural of books on the side of the John L. Dart Branch Library to honor Cynthia Graham Hurd, a 31-year employee of Charleston County Public Library and one of nine victims shot last year at Emanuel AME Church.

Artist and author R. ROBOTS will paint the bright geometric mural on the south side of the branch at 1067 King Street from 10 a.m.-6 p.m. from Tuesday, February 23 through Friday, February 26 (weather dependent). Residents in the area are encouraged to visit and watch him work, and kids can participate in a workshop with the artist from 3:30-5 p.m. on Thursday, February 25 to create their own mural-inspired artwork to be attached to book carts in the building.

Hurd was branch manager at the Dart Branch for 21 years before serving as branch manager of the St. Andrews Regional Library. The mural is being partially funded by a donation from Winston & Strawn LLP to the Cynthia Graham Hurd Memorial Fund, which was established at Charleston County Public Library by the Graham-Hurd families to promote outreach and educational programming at the two libraries she managed during her career.

The project is a collaboration between CCPL and Enough Pie, a non-profit organization dedicated to engaging and inspiring residents in Charleston’s Upper Peninsula. The organization identified the talented muralist and street artist to be part of the project.
CCPL Acting Executive Director Cynthia Bledsoe praised Enough Pie plus the many other donors and organizations committed to seeing that Hurd’s legacy continues.

“Cynthia grew up and lived just blocks from the Dart Library, and she helped thousands of people during her years there. This bright, bold mural will be a daily reminder of Cynthia and all the lives she touched,” she said.

Enough Pie Executive Director Cathryn Zommer said the Dart Library is a great community resource, and the organization is pleased to be able to help honor Hurd’s memory.

“We believe this mural will bring more folks to the branch and honor Cynthia by illuminating the magic of books and storytelling on a main wall of the building.”

ABOUT THE ARTIST:
Nick Kuszyk, aka R. Robots, is known for his large public art projects throughout the world, including sites in Berlin, Prague, London, Tel Aviv and throughout the United States. His work also hangs in galleries and Penguin Books published his children’s book, R Robot Saves Lunch, in 2003. Kuszyk graduated from Virginia Commonwealth University in Painting and Sculpture and was awarded a Virginia Museum Fellowship. He currently lives in New York.