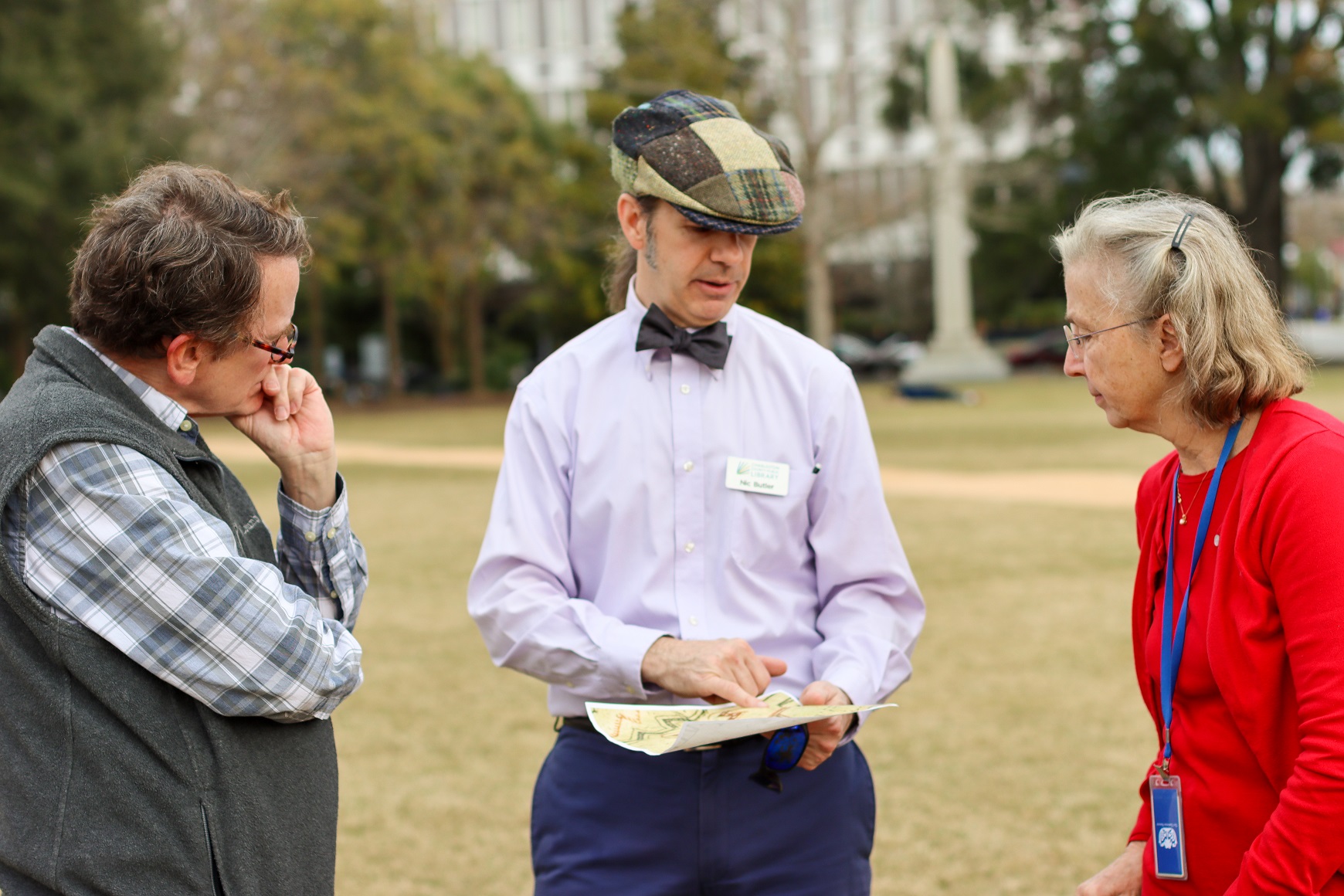 CHARLESTON, S.C. - Under partly cloudy skies and surrounded by the noise of Charleston's vibrant city center on a Wednesday afternoon, a team of students and reseachers gathered to sweep across plots of Marion Square in search of Revolutionary War history.

Using ground-penetrating radar to search for remnants of the 18th century fortress that straddled what is now King Street, the crew hopes to shed light on what is known as the Horn Work's design and enable civic leaders to better interpret this important Revolutionary War site for future visitors. Marion Square is one of Charleston’s most popular destinations, but few visitors recognize one of the city’s most valuable historical treasures within the park. Behind a modest iron fence stands a mysterious slab of gray, concrete-like material identified by a small plaque inscribed “Remnant of Horn Work. May 1780. Siege of Charleston.”

This brief text imparts little of the dramatic story behind the massive structure that once dominated the site of Marion Square during the American Revolution.

The “Horn Work” was a large fortification that once straddled the “Broad Path” (now King Street) just north of Charleston’s Boundary (now Calhoun) Street. The name “Horn Work” is a generic term used to describe a broad fortress with a central gateway built to control the flow of traffic in and out of a town. The gate in King Street was flanked to the east and west by pair of horn-like half-bastions that projected northward, away from the town. Built during the French and Indian War and covering approximately ten acres, Charleston’s Horn Work was the northernmost link in a chain of fortifications that surrounded the peninsular capital of South Carolina. It was designed in 1757 by Lieutenant Emanuel Hess, a Swiss engineer serving the British 60th Regiment, then stationed in Charleston. During his brief tenure here, Lt. Hess also designed new fortifications on James Island, Port Royal Island, and at Dorchester, all of which were built of an oyster-shell cement called tabby and shared many design features.

George Roupell, one of the local Commissioners of Fortifications, designed a decorative “gateway at the entrance into town through the Horn Work,” which was approved and built in 1758. Local funding for the project was canceled in early 1759, after British victories in Canada dispelled the threat of further French offensive actions, and work ceased in April of that year.

After more than a decade of neglect, South Carolina forces readied the Horn Work for service shortly after the commencement of the American Revolution in 1775. The sudden appearance of a British army under General Augustine Prevost in the spring of 1779 caused panic in Charleston, but the sight of the massive Horn Work convinced the British to withdraw and return later with a larger force.

COMING UP IN MARCH

What’s the story behind that slab of rock standing in Marion Square? It was once part of the massive “Horn Work” fortification that served as the town gate and the centerpiece of Charleston’s defenses during the British siege of 1780. Join CCPL's historian, Dr. Nic Butler, for an illustrated history of the Horn Work from its construction in 1757 through its demolition in 1784. When a British force of approximately 14,000 men under the command of General Henry Clinton occupied the ground north of Charleston in the spring of 1780 and commenced a protracted siege of the town, the Horn Work formed the centerpiece of the American defensive line and the headquarters of the commanding officers.

Eighteen of the defenders’ largest cannon stood on an elevated platform and fired through embrasures in the Horn Work’s northern walls. One French officer remarked that the cannon within the Horn Work fired from a height of thirty feet above the surrounding terrain. Under the direction of French engineers in early 1780, laborers enclosed the unfinished south side of the Horn Work with a large earthen ravelin (a fortified gateway), and the American command designated the tabby fortress “a place of retreat for the whole army.” Despite their heroic efforts, the garrison was overwhelmed and capitulated.

Standing under the arched gateway of the Horn Work, American Generals Benjamin Lincoln and William Moultrie personally surrendered the Horn Work and the town to British Generals Henry Clinton and Alexander Leslie on 12 May 1780.

Following the conclusion of the war in 1783, South Carolina’s state government ceded the Horn Work and other urban fortifications to the newly-incorporated City Council of Charleston. The following year, the city paid laborers to demolish its tabby walls in order to make room for expanding development. Some portions of the Horn Work’s northeastern curtain line, including the slab now standing in Marion Square, escaped total destruction by serving as partition walls between newly-subdivided residential lots on the east side of King Street.

By 1865, only one small remnant of the Horn Work remained standing. In 1882 the city renamed Citadel Square in honor of Revolutionary War hero Francis Marion, and in 1883 enclosed the sole remnant of the Horn Work within a protective iron fence. As the city slowly transformed Marion Square from a military parade ground to a public park in the twentieth century, the modest slab of tabby was protected but not interpreted.

A limited archaeological effort in 1998 confirmed that the extensive foundations of the Horn Work lie approximately one foot below the current surface of Marion Square, but did not fully trace its large footprint within the park.