The word “tradition” is often used to describe many of the communal activities that surround various holidays both sacred and secular. Here in the Charleston area, for example, we share a number of Christmas “traditions” with communities near and far, and often believe these practices to be rooted in timeless custom. But how deep are the Lowcountry roots of our modern Christmas traditions? I haven’t conducted an exhaustive search for evidence related to this topic, but I’ve accumulated a sufficient number of anecdotes in the course of my research to offer a few general remarks that I think you’ll enjoy. If nothing else, I might supply you with a few morsels of polite dinner conversation that you can employ during the upcoming holiday.

Because we rely heavily on written records to understand the past, our ability to understand how this holiday was kept in the Charleston area in ages past is frustrated by one simple and logical fact: most writers put down their pens during the holiday season. During the observance of Christmas and, say, the day before and the day following the traditional feast day, shops closed, the government shut down, schools adjourned, newspapers stopped printing, and the Lowcountry became quiet. From scores of surviving letters and newspaper anecdotes, however, we can learn the basic outline of the season’s activities. Many people were busy visiting their family and neighbors, making music, dancing, hunting, and preparing fancy dinners. These were common practices, so few people felt the need to document them in written descriptions. 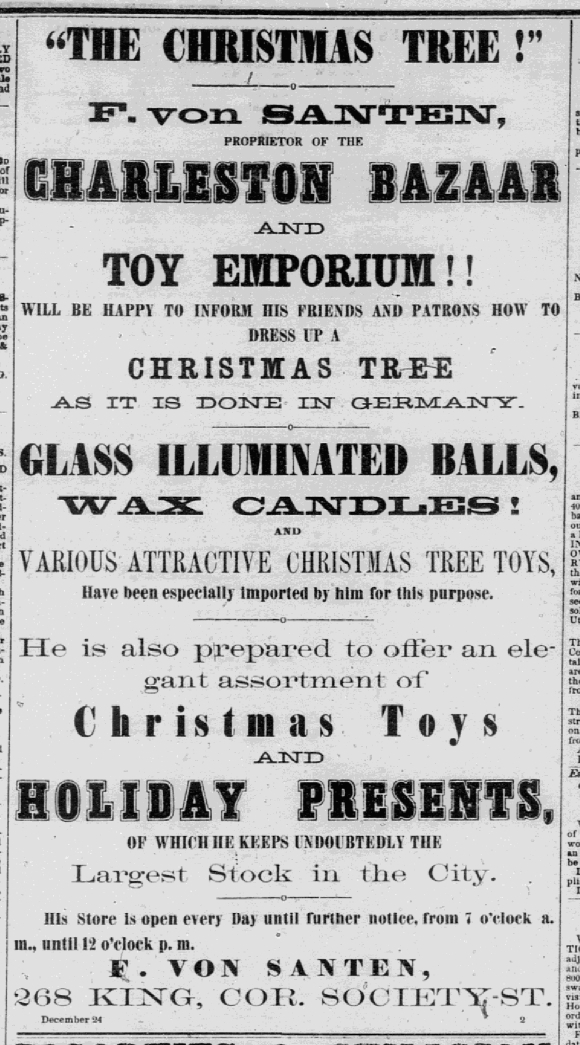 The enslaved people who formed the majority of the population in the Lowcountry of South Carolina also enjoyed two or three days of rest and relaxation around the Christmas holiday. In both urban Charleston and on rural plantations, it was not unusual for white masters to allow their enslaved servants a bit of liberty to prepare a festive meal, and even to visit loved ones elsewhere within the Lowcountry. Written descriptions of Christmas traditions among early South Carolina’s enslaved majority are now exceedingly rare because of the segregated nature of those traditions. Unfortunately for us, the prejudiced white writers who rarely put pen to paper to document their own holiday practices were even less inclined to describe the festivities taking place in the slave quarters.

In general, the white folks of early South Carolina celebrated the Christmas holiday by following the traditions established back in Europe. English folk formed the majority of the white population here in the seventeenth and eighteenth centuries, followed by Irish, Scots, French, German, and Dutch immigrants. All of these diverse folks represented different denominations of the Protestant persuasion, however, because Catholicism was the only branch of the Christian faith not welcome in early South Carolina. Santa Claus was entirely unknown here until the late nineteenth century. St. Nicholas might have been mentioned here by the late eighteenth century, after Catholicism finally became legal in South Carolina in 1790. Father Christmas, a traditional English persona, might have visited early Charleston, but I haven’t found any references to him here before the middle of the nineteenth century.

Christmas—the 25th day of December—was also one of the traditional “quarter days” of the English calendar. As I discussed in an earlier episode about the use of the Julian Calendar in early Charleston (see Episode No. 47), our community once marked the passing seasons of the year with four important dates: Lady Day (March 25th) marked the beginning of the year, followed by Midsummer Day (June 24th); then Michaelmas (September 29th), and finally Christmas. All financial accounts—be it the annual budget of our provincial government, a tenant’s rental contract, or a man’s bar tab at the local pub—were all calculated on a schedule formed around these quarter days. The local newspapers of colonial-era Charleston, for example, frequently reported the quantity of articles exported from South Carolina between, say, Christmas and Midsummer, or the number of enslaved Africans imported between, say, Lady Day and Michaelmas. Even after our community adopted the more accurate Gregorian Calendar in January 1752, Christmas and the other quarter days continued to play an important role in marking the passage of time in Charleston.

At some point in the early history of urban Charleston, many denizens of the town commenced a tradition of lighting fireworks and firing guns to celebrate the Christmas holiday and (after 1752) New Year’s Day. To curb this noisy and dangerous practice, our provincial legislature ratified a law in the spring of 1750 to regulate the streets of the colonial capital and the behavior of the people using them.[1] The twenty-ninth paragraph of that statute prohibited “the firing and flinging of squibs, crackers, and other fireworks,” especially on holidays, a practice which “has of late so much prevailed in Charles Town as to endanger and annoy persons in passing the streets.” From that time well into the nineteenth century, it became a Christmas tradition for the local Charleston newspapers to publish repeated reminders of this 1750 law every December. Despite these efforts, the noisemaking continued. In October of 1772, for example, a local grand jury complained about “the common practice of firing guns on the eves of Christmas, and on the mornings of the New Years, by which method, it is impossible to distinguish, whether such firings are intended as alarms to the inhabitants, to prepare themselves against an internal or approaching enemy, or to proclaim the illegal mirth of a few inconsiderate people.”[2]

In my personal experience trolling through thousands of documents from the first century South Carolina, haven’t seen any references to gift-giving or the exchanging of gifts at Christmas. I have, however, seen a few references to the English tradition of the “Christmas box.” This was an ancient custom in which tradespeople and servants received small gratuities and even leftovers from their employers or customers on the day following Christmas, December 26th. Here in Charleston, this English custom was apparently extended to the enslaved population as well. Late in the year 1759, for example, local printer Peter Timothy advertised for subscriptions to publish a long poem by a local author. Part of the proceeds collected for this endeavor, said Mr. Timothy, would go to his enslaved assistant, Felix, “to augment his Christmas Box.”[3] 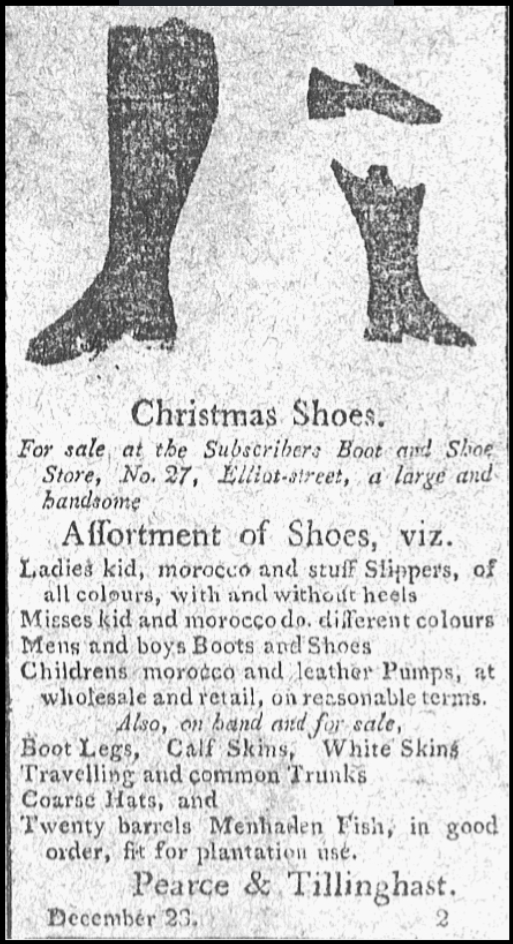 We can find evidence of the practice of giving gifts at Christmas by trolling through the  newspapers of early Charleston. Beginning in the early years of the nineteenth century, the daily newspapers (there were usually two or three in operation at any one time) began publishing terse advertisements for “Christmas Presents” (including illustrated cards for children) and “Christmas Shoes.”[4] Such holiday advertisements became more numerous and more explicit as the years progressed and the world became more commercialized. In 1817, for example, John Battker advertised the sale of “Christmas gifts” at the northwest corner of Market and Church Streets, including oranges and plantains to “make a pleasing appearance on the table, and much more gratifying to the taste,” as well as “a variety of pleasing toys” for children, “which are calculated to gratify the mind, without possibly injuring their health or morals.”[5] As mass-production techniques began to transform our consumer culture in the mid-nineteenth century, the nature of our Christmas gifts evolved, but things like clothing, puzzles, dolls, jewelry, and books remained staples of the trade into the twentieth century.

The Christmas tree is a ubiquitous holiday symbol throughout our community and very nearly around the world, but it’s important to remember that it hasn’t always been so. The tradition of erecting an evergreen tree indoors during the Christmas season, decorating it with lights and baubles, and placing gifts on or under its branches, was not a tradition in the English-speaking world until the middle of the nineteenth century. The Christmas tree is associated mostly with German-speaking Christians of central Europe. German Palatines (from what is now the southwest corner of Germany; see Episode No. 15) began arriving in Charleston in the 1730s, and in the 1750s formed the first Lutheran Church in South Carolina—St. John’s Church, in Archdale Street. Some of those early German immigrants or their descendants might have erected an evergreen Christmas tree—or tannenbaum—in their modest homes, but the practice was certainly not widespread.

In fact, we can trace the beginning of the Christmas tree tradition in Charleston, with a fair amount of certainty, to a specific incident that took place in December of 1850. The story revolves around a mega-celebrity of that day, Swedish soprano Jenny Lind, who in September 1850 embarked on a long tour across the United States organized by master showman P. T. Barnum. After appearing to sold-out audiences in New York City, Ms. Lind and her fashionable entourage traveled in a private rail car across the northeastern states and performed in a number of cities. In mid-December, she sailed by steamship from Baltimore to Charleston, where our local newspapers had covered her travels with close attention. The sea voyage was stormy and unusually long, so Ms. Lind arrived in Charleston on December 23rd feeling seasick and exhausted. The first of her three concerts in the Palmetto City wasn’t until December 26th, but throngs of fans and admirers gathered outside her room at the Charleston Hotel on Meeting Street in the hopes of catching a glimpse of the celebrated “Swedish Nightingale.” On Christmas Eve, 1850, the people passing along the street noticed an unusual sight in the window of Jenny Lind’s room. “A Forest Tree,” observed the Charleston Courier, “was placed at her window, decorated with variegated lamps, which attracted much attention.”[6] 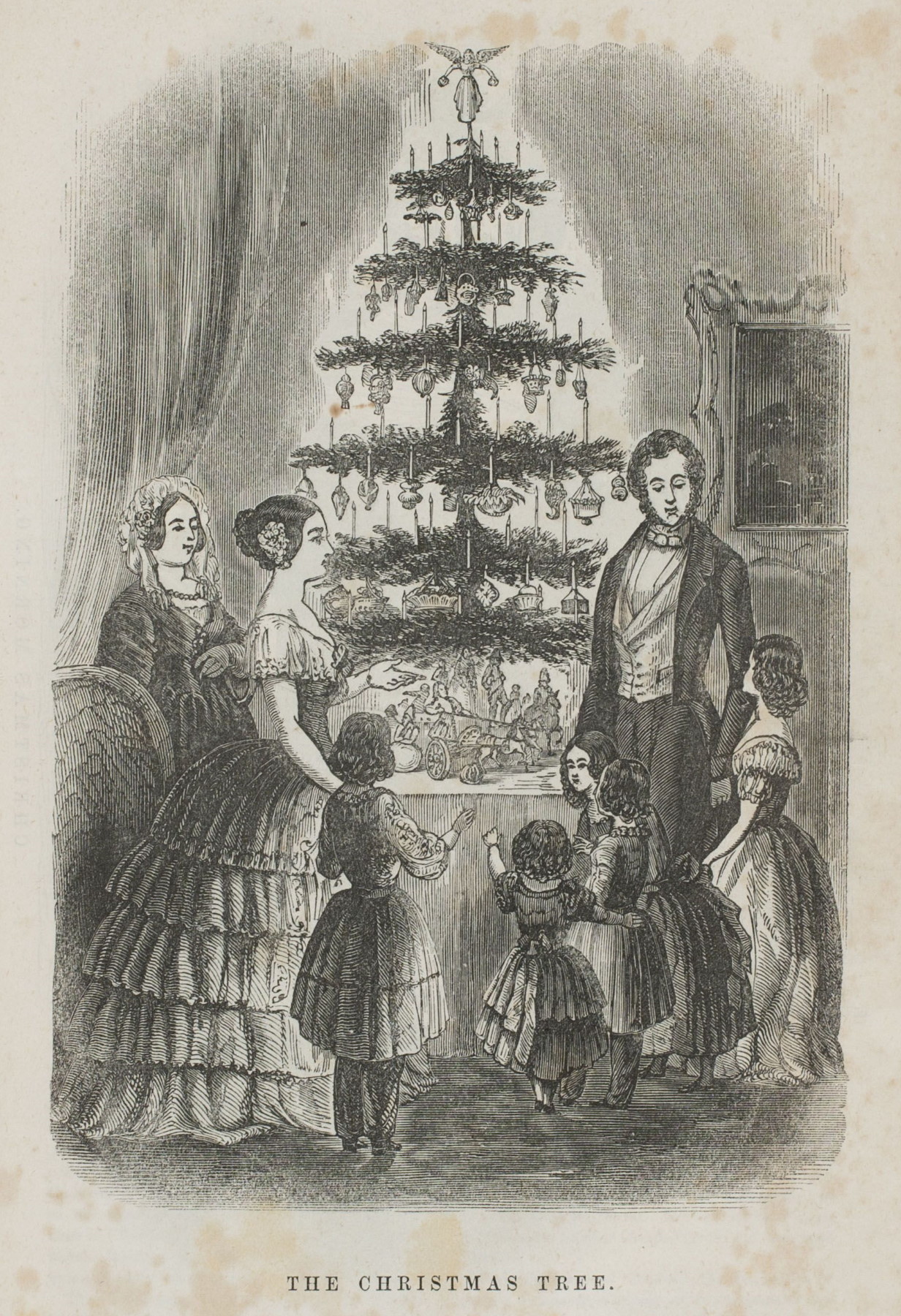 That same month, a very popular American periodical called Godey’s Lady’s Book published an illustration that proved to be extremely influential. The magazine’s December 1850 issue included an engraving (originally published in 1848) of Britain’s Queen Victoria and her family standing around a decorated evergreen tree placed on a tabletop and surrounded by small presents. The immense popularity of both Jenny Lind and Queen Victoria, combined with the affection both ladies demonstrated for evergreen decorations, propelled the Christmas tree into the vanguard of holiday necessities in the Charleston area and beyond. William Gilmore Simms’s 1847 short story, Maize In Milk, for example, described a Lowcountry Christmas without mentioning an evergreen tree. Shortly after the events of 1850, however, Simms included a family scene around a gift-laden indoor tree in his 1852 novella, The Golden Christmas. Also in 1852, Charleston’s Lutheran congregation hosted a Christmas Festival to raise money for its German Sunday School. To draw community attention to the charitable event, held on Christmas day, the local press noted that “a Christmas tree, according to an old custom of their native country, will be suitably decorated and illuminated.”[7] The roots of this now-ubiquitous practice, therefore, appear to be planted in the decade leading up to the American Civil War.

Finally, I’ll mention that holiday salutations in our community haven’t changed that much over the past few centuries. You might have heard some English folks use the expression “Happy Christmas,” for example, and so we might imagine that some Charlestonians also greeted each other with that festive phrase in ages past. In late December, 1760, however, the printer of the South Carolina Gazette, Peter Timothy, saluted his customers with a more familiar expression: “We wish all our readers a merry Christmas.” To conclude today’s program, I’d like to borrow another phrase printed in Mr. Timothy’s newspaper on Christmas Eve of 1744. To all the faithful readers and listeners that support the Charleston County Public Library and the Charleston Time Machine, I wish you “a cheerful Christmas, and many happy years.”[8]

[1] Act No. 775, “An Act for keeping the Streets in Charles Town clean, and establishing such other regulations for the security Health and Convenience of the Inhabitants of the said Town as are therein mentioned, and for establishing a new Market in the said Town,” ratified on 31 May 1750. This important law was omitted from the published Statutes at Large of South Carolina, but the engrossed manuscript copy survives at the South Carolina Department of Archives and History.