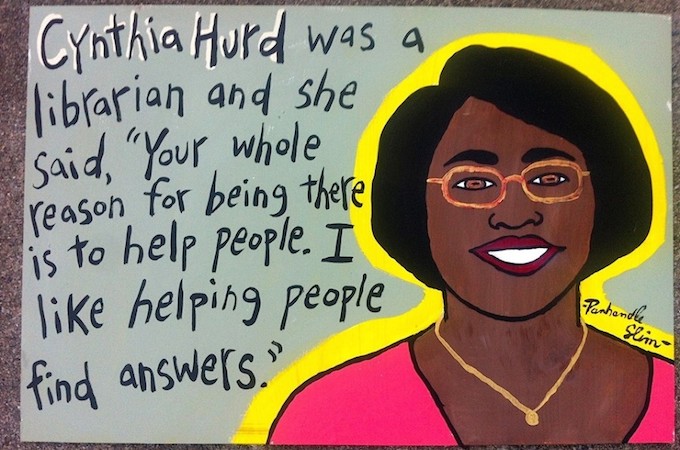 CHARLESTON, S.C. – This month, Charleston County Public Library (CCPL) is honoring the lives of those lost at the Mother Emanuel AME Church six years ago by promoting acts of kindness around the county and sharing a special tribute documentary created last year about Cynthia.

The Library is asking the public to perform acts of kindness and post a photo or video of the act to social media using #ThisIsForCynthia. Cynthia Graham Hurd was one of the nine people killed in the shooting at Mother Emanuel AME Church and she was a beloved long-time librarian with CCPL. The Cynthia Graham Hurd/St. Andrews Library is named after her.

CCPL published a video showing some of its staff members performing a few acts of kindness in hopes to encourage the public to keep it going the rest of June. Those who participate should upload photos or videos of their acts of kindness and tag them with #ThisIsForCynthia.

“These interviews help celebrate Cynthia and the beautiful person she was,” said Gooding. “We are not focusing on the tragedy. Instead, we are celebrating her lasting legacy.”

CCPL staff have also put together a collection of month-long events and displays:

View photos that document Librarian Cynthia Graham Hurd's 31-year career with CCPL and the legacy she created through the lives she touched in the Charleston community and around the country.  Select materials concerning Mother Emanuel AME Church and the Emanuel 9 will also be on display in the lobby.

From Executive Producers Julian Gooding, Malcolm Graham, and Melvin Graham, this 2020 documentary captures Cynthia Graham Hurd’s life and dedication to serving her community as told by her family, library coworkers, dignitaries, and friends. The official portrait funded in 2018 by the Charleston Friends of the Library to honor her will also be available for viewing.

Donate, donate, donate! Residents are encouraged to drop off new or gently used children’s books for students in kindergarten through third grade at six CCPL branches and select Mellow Mushroom locations. Donated books will be distributed through the Reading Partners’ network of tutors to help students in local schools improve their literacy and reading levels. Students will be able to further develop their love of reading by building their own library collections at home with the donated books. This book drive is hosted by the Cynthia Graham Hurd Foundation and Reading Partners, in partnership with CCPL, the Berkeley County Public Library, Live 5 News and Mellow Mushroom.

Called to Forgive: A Book Study with Rev. Anthony Thompson
June 15 and June 22 at 6 p.m.
Hosted on Zoom and streamed to Facebook

Join Rev. Anthony Thompson in a crucial conversation about the Mother Emanuel tragedy on June 17, 2015 and the possibilities of racial understanding and reconciliation. This book talk is facilitated by Charleston Illumination Project founder Margaret Seidler.

The story is heartbreaking, coming to you in his words, of his wife Myra's murder in a senseless and terrifying act of pure and calculated hate. The book offers more - it reveals how Rev. Thompson forgave the young racist man, then helps you explore how to use forgiveness as a path to breakdown cultural and racial differences. The hope is that Called to Forgive will bring you an eye-opening understanding of forgiveness and its role in creating unity and peace.

Check the online catalog or call your local branch to reserve your copy of Called to Forgive - available in print, ebook and audiobook.

A number of branches have created special memorial Take and Make activities that can be picked up throughout the month. Ask your local branch about their plans.