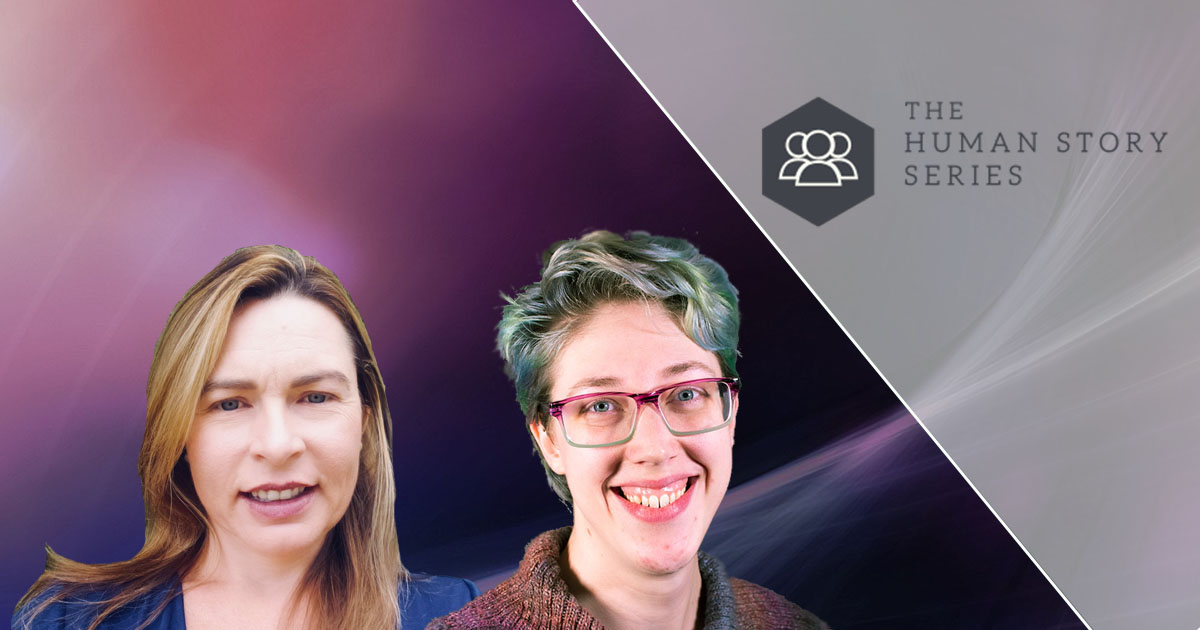 CHARLESTON, S.C. - Charleston County Public Library welcomed Dorathea Chaplin and Ginger Smith to the Main Branch Auditorium to discuss how they live life to the fullest while balancing the needs of chronic health conditions.

During the hour long event, Chaplin and Smith told stories and answered questions from a group of library patrons and visitors in the Main Library Auditorium and people watching online through Facebook Live. The entire event was streamed on CCPL's Facebook page. Watch the video by clicking on the player on the right.

In conjunction with the Human Story Series event, we've compiled a list of books that take an even closer look at chronic conditions and their treatment.

Cognitive Therapy for Chronic and Persistent Depression by Richard Moore

For the practitioner, this book offers guidance on how toaddress particular issues that commonly arise at each stage of therapy. Through extensive clinical material, Cognitive Therapy forChronic and Persistent Depression demonstrates how entrenchednegative thinking patterns and ongoing avoidance can be addressedto achieve significant change in many people's lives.

Damon Weber is a brilliant kid--a skilled actor and a natural leader at school. Born with a congenital heart defect that required surgery when he was a baby, Damon's spirit and independence have always been a source of pride to his parents, who vigilantly look for any signs of danger.

Unbowed by frequent medical checkups, Damon proves to be a talent on stage, appears in David Milch's HBO series Deadwood, and maintains an active social life, whenever he has the energy. But running through Damon's coming-of-age in the shadow of affliction is another story: Doron's relentless search for answers about his son's condition in a race against time.

Immunity: How Elie Metchnikoff Changed the Course of Modern Medicine by Luba Vikhanski

Around Christmas of 1882, while peering through a microscope at starfish larvae in which he had inserted tiny thorns, Russian zoologist Elie Metchnikoff had a brilliant insight: what if the mobile cells he saw gathering around the thorns were nothing but a healing force in action? Metchnikoff's daring theory of immunity--that voracious cells he called phagocytes formed the first line of defense against invading bacteria--would eventually earn the scientist a Nobel Prize, shared with his archrival, as well as the unofficial moniker "Father of Natural Immunity." But first he had to win over skeptics, especially those who called his theory "an oriental fairy tale." Using previously inaccessible archival materials, author Luba Vikhanski chronicles Metchnikoff's remarkable life and discoveries in the first moder n biography of this hero of medicine. Metchnikoff was a towering figure in the scientific community of the early twentieth century, a tireless humanitarian who, while working at the Pasteur Institute in Paris, also strived to curb the spread of cholera, syphilis, and other deadly diseases. In his later years, he startled the world with controversial theories on longevity, launching a global craze for yogurt, and pioneered research into gut microbes and aging. Though Metchnikoff was largely forgotten for nearly a hundred years, Vikhanski documents a remarkable revival of interest in his ideas on immunity and on the gut flora in the science of the twenty-first century.

The Wisdom of Healing by David Simon, M.D.

"We are in the midst of a health revolution," says Simon. "There is a perplexing disparity between the amazing medical miracles we have available to us  and the growing dissatisfaction with our modern health care system.  We have paid an emotional price for the high technology medicine of our time, sacrificing humane caring for efficiency.  And we are paying an ever increasing financial price as well."

The Wisdom of Healing is divided into three sections,  each one designed to integrate the healing sciences of the east and west.  Dr.  Simon begins by exploring the importance of mental well being on physical health and continues with his insight into the world of the ancient Indian tradition of mind body medicine known as Ayurveda, which includes such treatments as food, herbs, breathing, purification and rejuvenation.  He concludes by recommending simple mind body prescriptions that can be incorporated to daily life. Never before has there been such an in-depth look into the study of applying ayurvedic medicine to some of  the most fatal diseases of this century.  InThe Wisdom of Healing, Dr. Simon breaks new ground in the affirmation that our mental state influences our physical well being.

Elle & Coach: Diabetes, the Fight for My Daughter's Life, and the Dog Who Changed Everything by Stefany Shaheen

Stefany Shaheen takes readers on an emotional journey as she tries everything to manage her daughter Elle's deadly and unpredictable disease, all while juggling a family of four children. Overcoming the skepticism that a dog can provide answers that medical science is still seeking, the family finds a resounding sense of peace and reassurance through Coach's near miraculous abilities as a medic-alert dog, specially trained to detect dangerous changes in blood sugar levels. Elle & Coach is a story of determination and finding hope in the most unlikely of places.

Breakthrough: Elizabeth Hughes, the Discovery of Insulin, and the Making of a Medical Miracle by Thea Cooper

It is 1919 and Elizabeth Hughes, the eleven-year-old daughter of America's most-distinguished jurist and politician, Charles Evans Hughes, has been diagnosed with juvenile diabetes. It is essentially a death sentence. The only accepted form of treatment - starvation - whittles her down to forty-five pounds skin and bones. Miles away, Canadian researchers Frederick Banting and Charles Best manage to identify and purify insulin from animal pancreases - a miracle soon marred by scientific jealousy, intense business competition and fistfights. In a race against time and a ravaging disease, Elizabeth becomes one of the first diabetics to receive insulin injections - all while its discoverers and a little known pharmaceutical company struggle to make it available to the rest of the world.

Relive the heartwarming true story of the discovery of insulin as it's never been told before. Written with authentic detail and suspense, and featuring walk-ons by William Howard Taft, Woodrow Wilson, and Eli Lilly himself, among many others.

Angela Medearis is the Kitchen Diva, a popular, regular guest chef on The Dr. Oz Show. In this cookbook she gives readers 150 of her healthy, signature diabetic recipes packed with flavor that both diabetic and non-diabetic family members will love.

The Kitchen Diva's Diabetic Cookbook is an inspirational collection of more than 150 simple, flavorful, budget-friendly recipes that address the dietary needs of prediabetics, juvenile diabetics, type 1 and type 2 diabetics, women with gestational diabetes, people with diabetic-related complications, and anyone seeking to embrace a healthier diet and lifestyle. A detailed nutritional and caloric analysis is included with each recipe to ensure that daily nutritional requirements are met. It's the perfect cookbook for anyone seeking a variety of imaginative, healthy, and delicious recipes suitable for all diabetics and those who dine with them.

Millions of people suffer from debilitating chronic pain from arthritis, fibromyalgia, low back pain, chronic headache syndromes, neuropathies, or other painful conditions. People contending with chronic pain often spend considerable time, energy, and money searching for answers and visit multiple doctors, trying anything to find relief. When the source of pain is unclear or difficult to diagnose, their experiences are additionally frustrating, exhausting, and depressing.

This book offers a hands-on approach to improving life with chronic pain, whatever the underlying cause. As a sociologist, psychotherapist, and someone with firsthand experience with chronic pain, the author understands the challenges that accompany pain and has devised realistic strategies to fare better.

Paintracking provides a systematic method that empowers individuals to navigate the otherwise overwhelming array of treatment options and incorporate the effective ones into their lives for continued, incremental progress. Its cornerstone is a self-study tool that enables readers to improve. Readers are instructed on how to track and interpret their experience, whether using a pen and paper or the online tool offered as a companion to the book. By cultivating awareness of how their body responds in different situations and to different therapies, readers will become capable self-advocates, able to make informed choices.

Your Symptoms Are Real: What To Do When Your Doctor Says Nothing Is Wrong by Benjamin H. Natelson, M.D.

If you're one of the millions of people who suffer from debilitating pain or chronic fatigue that has gone undiagnosed, it is possible that your symptoms are caused by an "invisible illness" such as chronic fatigue syndrome (CFS), fibromyalgia (FM), irritable bowel syndrome (IBS), or multiple chemical sensitivity (MCS). Because your symptoms are undetectable, your doctor may have misdiagnosed you or told you there's nothing wrong, or, worse yet, that it's all in your head.

Now help is at hand. In this insightful book, Dr. Benjamin Natelson draws on his eighteen years of dedicated research into "invisible illnesses" that defy medical explanation to reassure you that your symptoms are real and empower you to take charge of your health with a step-by-step blueprint to wellness. First, he addresses you—your feelings, your symptoms, and the options available to you despite the diagnoses or treatments you may have already received. Next, he arms you with the simple tools you need to seek out the doctors and specialists who are most likely to recognize and treat your symptoms and explains how to talk with them so that they'll actually listen. Finally, he explains the dietary, medicinal, and gentle physical conditioning programs that can gradually help relieve your symptoms and offers a look at the cutting-edge research and promising treatments that are on the horizon.

The Widening Circle: A Lyme Disease Pioneer Tells Her Story by Polly Murray

The first person to focus attention on Lyme disease, Polly Murray tells the harrowing story of her early efforts to identify what was making her family so sick-- and their battle with the illness over a twenty-year period.

In Lyme, Connecticut, in 1965, Polly Murray, her husband, and their four children led an almost picture-perfect life. But Polly began to be plagued by mysterious ailments, and as the rest of her family started to experience similar symptoms, she knew something was terribly wrong. When doctor after doctor failed to explain what was happening to them, Polly was forced to confront disbelief, lack of caring, and, eventually, apathy on the part of the medical establishment, all the while suffering herself. Her personal investigation into the cause of her family's illness, which became as passionate as a detective's, eventually initiated a medical investigation that led to the 1982 discovery by Dr. Willy Burgdorfer of the dangerous bacteria that causes Lyme disease. Polly tells her tale from the viewpoint of a patient who was a pioneer in the medical recognition of Lyme disease. Lyme disease remains a poorly diagnosed, controversial illness. Lyme victims and their families can take hope from Polly's courageous and inspiring story.

Bite Me: How Lyme Disease Stole My Childhood, Made Me Crazy, and Almost Killed Me by Ally Hilfiger

Ally was seven years old when she was bitten by a tick and contracted Lyme disease, but she didn't know it for eleven years. For the next decade, she suffered from constant joint and muscle pain, chronic fatigue, brain fog, recurrent strep throat and headaches. Eventually worn out from the mysterious maladies plaguing her body, tired of her own forms of self medication--pot, alcohol--and drained from the notoriety she gained by producing and starring on her own reality show, Rich Girls, Ally ended up in a psych ward where she began her journey to diagnosis and recovery.

BITE ME is Ally's story, but its themes will be familiar to the 300,000 Americans diagnosed with Lyme disease each year, many of whom, like Ally, wondered for years what was wrong with them. Ally also offers readers hope and ideas for how they can transition from victim to survivor.