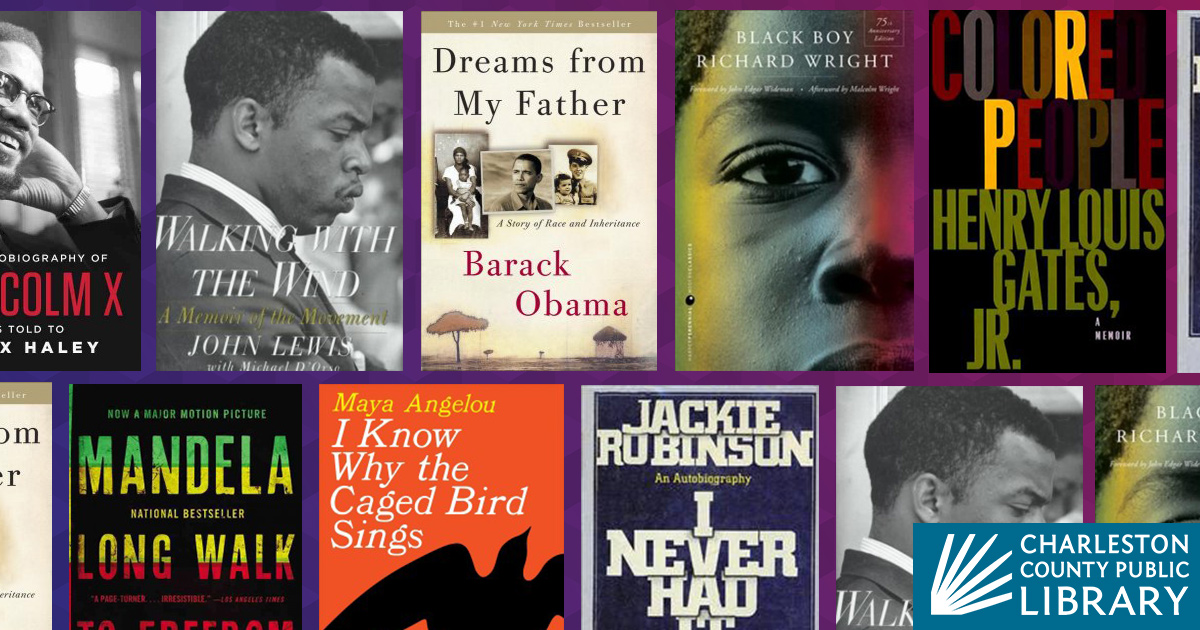 As part of CCPL's Black History Month celebrations, our librarians have curated a series of book lists the help any curious reader explore the lives and stories of influential Black leaders.

This week Ramon Maclin at the Cooper River Memorial Library put together this collection of autobiographies that explore the stories of world leaders, a reknowned poet, a sports legend, and even a young boy in the Jim Crow South. In each, the stories within provide a unique look inside some of the events that made history.

The Autobiography of Malcolm X by Malcolm X and Alex Haley

In the searing pages of this classic autobiography, originally published in 1964, Malcolm X, the Muslim leader, firebrand, and anti-integrationist, tells the extraordinary story of his life and the growth of the Black Muslim movement. His fascinating perspective on the lies and limitations of the American Dream, and the inherent racism in a society that denies its nonwhite citizens the opportunity to dream, gives extraordinary insight into the most urgent issues of our own time. The Autobiography of Malcolm X stands as the definitive statement of a movement and a man whose work was never completed but whose message is timeless. It is essential reading for anyone who wants to understand America.

I know why the caged bird sings by Maya Angelou

Here is a book as joyous and painful, as mysterious and memorable, as childhood itself. I Know Why the Caged Bird Sings captures the longing of lonely children, the brute insult of bigotry, and the wonder of words that can make the world right. Maya Angelou's debut memoir is a modern American classic beloved worldwide.

Sent by their mother to live with their devout, self-sufficient grandmother in a small Southern town, Maya and her brother, Bailey, endure the ache of abandonment and the prejudice of the local "powhitetrash." At eight years old and back at her mother's side in St. Louis, Maya is attacked by a man many times her age--and has to live with the consequences for a lifetime. Years later, in San Francisco, Maya learns that love for herself, the kindness of others, her own strong spirit, and the ideas of great authors ("I met and fell in love with William Shakespeare") will allow her to be free instead of imprisoned.

Poetic and powerful, I Know Why the Caged Bird Sings will touch hearts and change minds for as long as people read.

>A Young Black Man in America Nathan McCall was a smart kid growing up in a close, protective family in a black working-class neighbourhood. Yet by the age of fifteen he was packing a gun and embarking on a criminal career that would five years later land him in prison. A blistering chronicle of one man's struggle from the street to the prison yard and ultimately to the newsroom of 'The Washington Post' where he is now a respected reporter. An honest and searching look at the perils of the black male in the US.

Nelson Mandela was one of the great moral and political leaders of his time: an international hero whose lifelong dedication to the fight against racial oppression in South Africa won him the Nobel Peace Prize and the presidency of his country. After his triumphant release in 1990 from more than a quarter-century of imprisonment, Mandela was at the center of the most compelling and inspiring political drama in the world. As president of the African National Congress and head of South Africa's antiapartheid movement, he was instrumental in moving the nation toward multiracial government and majority rule. He is still revered everywhere as a vital force in the fight for human rights and racial equality.

Long Walk to Freedom is his moving and exhilarating autobiography, destined to take its place among the finest memoirs of history's greatest figures. Here for the first time, Nelson Rolihlahla Mandela told the extraordinary story of his life -- an epic of struggle, setback, renewed hope, and ultimate triumph.

When it exploded onto the literary scene in 1945, Black Boy was both praised and condemned. Orville Prescott of the New York Times wrote that "if enough such books are written, if enough millions of people read them maybe, someday, in the fullness of time, there will be a greater understanding and a more true democracy." Yet from 1975 to 1978, Black Boy was banned in schools throughout the United States for "obscenity" and "instigating hatred between the races."

Wright's once controversial, now celebrated autobiography measures the raw brutality of the Jim Crow South against the sheer desperate will it took to survive as a black boy. Enduring poverty, hunger, fear, abuse, and hatred while growing up in the woods of Mississippi, Wright lied, stole, and raged at those around him--whites indifferent, pitying, or cruel and blacks resentful of anyone trying to rise above their circumstances. Desperate for a different way of life, he may his way north, eventually arriving in Chicago, where he forged a new path and began his career as a writer. At the end of Black Boy, Wright sits poised with pencil in hand, determined to "hurl words into this darkness and wait for an echo." Seventy-five year later, his words continue to reverberate. "To read Black Boy is to stare into the heart of darkness," John Edgar Wideman writes in his foreword. "Not the dark heart Conrad searched for in Congo jungles but the beating heart I bear."

One of the great American memoirs, Wright's account is a poignant record of struggle and endurance--a seminal literary work that illuminates our own time.

I Never Had It Made: An Autobiography by Jackie Robinson

Before Barry Bonds, before Reggie Jackson, before Hank Aaron, baseball's stars had one undeniable trait in common: they were all white. In 1947, Jackie Robinson broke that barrier, striking a crucial blow for racial equality and changing the world of sports forever. I Never Had It Made is Robinson's own candid, hard-hitting account of what it took to become the first black man in history to play in the major leagues.

I Never Had It Made recalls Robinson's early years and influences: his time at UCLA, where he became the school's first four-letter athlete; his army stint during World War II, when he challenged Jim Crow laws and narrowly escaped court martial; his years of frustration, on and off the field, with the Negro Leagues; and finally that fateful day when Branch Rickey of the Brooklyn Dodgers proposed what became known as the "Noble Experiment" - Robinson would step up to bat to integrate and revolutionize baseball.

More than a baseball story, I Never Had It Made also reveals the highs and lows of Robinson's life after baseball. He recounts his political aspirations and civil rights activism; his friendships with Martin Luther King, Jr., Malcolm X, William Buckley, Jr., and Nelson Rockefeller; and his troubled relationship with his son, Jackie, Jr.

Originally published the year Robinson died, I Never Had It Made endures as an inspiring story of a man whose heroism extended well beyond the playing field.

Walking with the Wind: A Memoir of the Movement by John Lewis

Forty years ago, a teenaged boy stepped off a cotton farm in Alabama and into the epicenter of the struggle for civil rights in America, where he has remained to this day, committed still to the nonviolent ideals of his mentor Martin Luther King and the movement they both served. John Lewis's life, which he tells with charm, warmth, and toughness, ranges across the battlefields of the civil rights movement -- Selma, Montgomery, Birmingham, Mississippi. It is peopled with characters, including Diane Nash, Julian Bond, and Marion Barry; Bull Connor and Bobby Kennedy; James Farmer and Jim Forman; Malcolm X and Lyndon Johnson; Shirley MacLaine and David Halberstam; Harry Belafonte and Martin Luther King, and many more. From a sharecropper's farm to Nashville in the late 1950s, Lewis was swept up by the rising winds of the civil rights movement where he risked his life over and over, and went to jail many, many times. By the 1960s, he was steering the sit-in movement through the South, leading the Freedom Rides, assuming the chairmanship of SNCC, and stepping into the national spotlight at the 1963 March on Washington. Lewis was in the Mississippi Summer of 1964, at Bloody Sunday in Selma in 1965, at Bobby Kennedy's side in 1968 moments before Kennedy was gunned down in the kitchen of Los Angeles's Ambassador Hotel. As a sixth-term United States Congressman, the highest ranking, black elected official in the country, Lewis continues the nonviolent struggle that has defined his entire life.

In a coming-of-age story as enchantingly vivid and ribald as anything Mark Twain or Zora Neale Hurston, Henry Louis Gates, Jr., recounts his childhood in the mill town of Piedmont, West Virginia, in the 1950s and 1960s and ushers readers into a gossip, of lye-and-mashed-potato “processes,” and of slyly stubborn resistance to the indignities of segregation.

A winner of the Chicago Tribune’s Heartland Award and the Lillian Smith Prize, Colored People is a pungent and poignant masterpiece of recollection, a work that extends and deepens our sense of African American history even as it entrances us with its bravura storytelling.

Dreams from my Father by Barack Obama

Obama argues with himself on almost every page of this lively autobiographical conversation. He gets you to agree with him, and then he brings in a counternarrative that seems just as convincing. Son of a white American mother and of a black Kenyan father whom he never knew, Obama grew up mainly in Hawaii. After college, he worked for three years as a community organizer on Chicago's South Side. Then, finally, he went to Kenya, to find the world of his dead father, his "authentic" self. Will the truth set you free, Obama asks? Or will it disappoint? Both, it seems. His search for himself as a black American is rooted in the particulars of his daily life; it also reads like a wry commentary about all of us. He dismisses stereotypes of the "tragic mulatto" and then shows how much we are all caught between messy contradictions and disparate communities. He discovers that Kenya has 400 different tribes, each of them with stereotypes of the others. Obama is candid about racism and poverty and corruption, in Chicago and in Kenya. Yet he does find community and authenticity, not in any romantic cliche, but with "honest, decent men and women who have attainable ambitions and the determination to see them through."