Reading companion to exploring the sloth enclosure at the Cincinatti Zoo 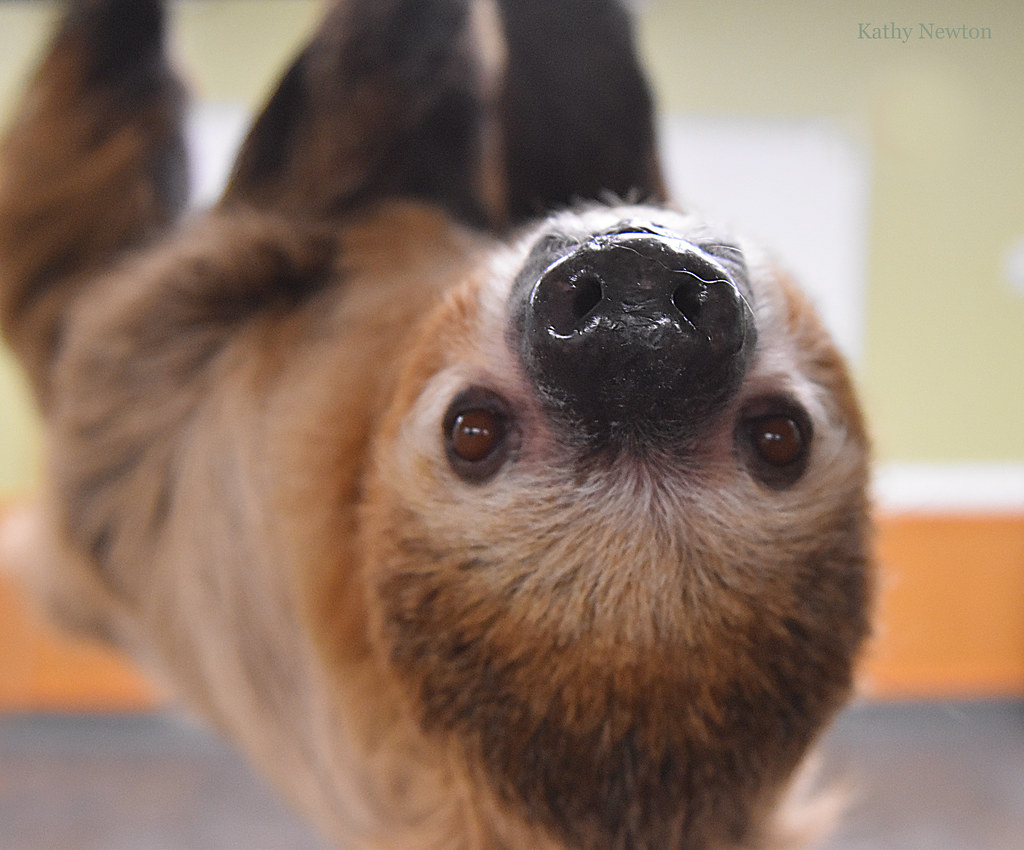 CHARLESTON, S.C. - If you joined our field trip to the zoo this afternoon, you saw Mo the Sloth eat a grape with a vitamin in it. Who knew they liked grapes, and strawberries, and corn on the cob!

If you have a child who loves sloths, they might enjoy some of these books we've compiled about sloths! All of them are available on Hoopla and are free to download. Some are factual, and some are silly (especially that first title).

Dwan and Chantelle became inspired to write a children book after listening to a keynote speaker, (Mem Fox) at a NAEYC conference in November 2012. With their love for sloths, early childhood education and early literacy, the story began!

Life In The Sloth Lane

Is there a reason sloths are always smiling? Yes! They've mastered the art of living slow in a world whose pace is making everyone crazy. Along with being the 'it' animal-'sloths are the new kittens' (Washington Post)-the sloth clearly has much to teach us about how to live. Combining the irresistible cuteness of sloths with words of wisdom about slowing down, Life in the Sloth Lane is a mindfulness book like no other.

On spread after spread we see heart-tugging, full-color images of sloths-grown-ups and babies, both two-toed and three-toed, draped in trees, lying on hammocks, eating, hugging, nuzzling, playing-paired with inspiration on the joy of living slow, including quotes from Thoreau and Emily Dickinson, Paulo Coehlo and Elizabeth Gilbert. Written by Lucy Cooke, author of the sellout Sloths calendar and the 'Steven Spielberg of sloth filmmaking' (The Atlantic), Life in the Sloth Lane is the perfect gift for anyone who wants to step out of the fast lane. Or-hint, hint-needs to.

How Slow Is A Sloth?

Introduces the slow speed of a sloth to readers through simple text, photograph, and measurement comparisons. Additional features include a phonetic glossary, index, sources for further research, and a Check It Out! section that supplements the main text with additional fun comparisons and facts about sloths.

Simple text and vivid photograph comparisons aid in readability and visual literacy skills. Additional features include a fast facts section, a phonetic glossary, an index, sources for further research, and a note for parents and teachers. This series is perfect for beginning readers.

Super Sloth isn't fast. He can't fly. But he is very, very good at moving slowly and looking just like a greenish bit of tree. When his archenemy Anteater makes off with some prize mangoes, Super Sloth vows to save the day . . . eventually!

From the creator of critically acclaimed Fergal is Fuming comes Starling's laugh-out-loud tale of one ordinary sloth turned superhero.

Jeffrey can't think of a thing to write, so he doodles instead, only to have his doodle begin to order him about. Jeffrey struggles with the situation until he discovers that the most strong-willed doodle is powerless against a well-told tale. Jeffrey and Sloth is bound to have children rushing for their colored pencils and their pens to see who and what they can create.

The Cry Of The Sloth

The tragicomic tale of a frustrated writer angry at the world. Living on a diet of fried Spam, vodka, sardines, cupcakes, and Southern Comfort, Andrew Whittaker is slowly being sucked into the morass of middle age. A negligent landlord, small-time literary journal editor, and aspiring novelist, he is-quite literally-authoring his own downfall. From his letters, diary entries, and fragments of fiction, to grocery lists and posted signs, this novel is a collection of everything Whittaker commits to paper over the course of four critical months.

Beginning in July, during the economic hardships of the Nixon era, we witness our hero hounded by tenants and creditors, harassed by a loathsome local arts group, and tormented by his ex-wife. Determined to redeem his failures and eviscerate his enemies, Whittaker hatches a grand plan. But as winter nears, his difficulties accumulate, and the disorder of his life threatens to overwhelm him. As his hold on reality weakens and his schemes grow wilder, his self-image as a placid and slow-moving sloth evolves into that of a bizarre and frantic creature driven mad by solitude.

Offers 12 exciting facts about these slow-moving animals, including a look at their diet, habitats, life cycle, and more. Full-color spreads give readers fascinating facts about several types of sloths and engage readers in their unique environments.

A wonderfully entertaining celebration of that most unique of creatures: the sloth. In public estimation, sloths have undergone an astonishing transformation in the course of the past few years. Thanks largely to YouTube clips posted by the sloth orphanage in Costa Rica, sloths have attracted a vast audience of admirers. Instead of seeing them as ridiculous anachronisms of which we know little, they have turned into creatures considered by many to be the most endearing on earth.

Over much the same period, scientific investigations have also changed our view of sloths. No longer are they seen as total misfits in the modern world but, in the words of one specialist sloth investigator, they are 'masters of an alternative lifestyle'. In this wonderfully entertaining celebration of this most unique of creatures, William Hartston reveals the fascinating history of the sloth, from the prehistoric ground sloth to modern pygmy sloths in Panama, explores the current state of the science of sloths and reveals the truth behind sloth behaviour.