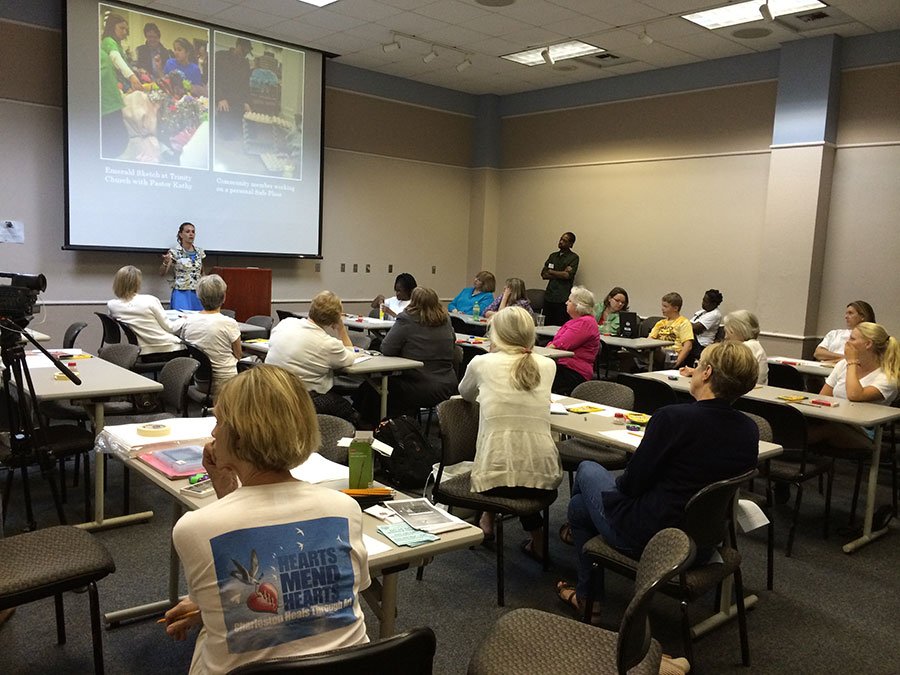 CHARLESTON, S.C. — In December 2012, a lone gunman walked into Sandy Hook Elementary School and killed 26 children and adults. His actions traumatized an entire community and nation, but it was residents of Newtown, Conn. who had to comfort their children and return to work, just days after attending funerals for friends, neighbors and their children’s classmates.

Word of the shootings reached every corner of the world as media representatives descended on Newtown, interviewing family members, witnesses and community leaders and attending funeral after funeral. People were coming to town wanting to help, stopping by the school to offer prayers or leave flowers and sending donations to help the victims’ families and the school.

As weeks and months passed, many felt the community could get back to business as usual if the media would stop talking about the shootings all the time and if out-of-towners would stop making pilgrimages to visit the school. These visitors meant well, but they were making it harder for residents to move on … that is, of course, if any community can move on after something so devastating.

When Nicole Porter Willcox heard about the Sandy Hook Elementary School shootings 60 miles away in Newtown, Conn., the New Yorker understood something that many local residents couldn’t begin to comprehend in the immediate aftermath of the event – she knew the entire community, not just those who lost a loved one, would suffer grief-related symptoms because of the devastating trauma, and recovery would be long and difficult.

As a psychotherapist and art therapist, Willcox knew how to help people suffering from trauma-induced mental health issues. At the request of friends from Newtown, she mobilized resources and pulled together groups of Master’s level trained art therapists in an effort to help the town’s residents.

When she arrived, Willcox found that many residents were unable to process their feelings and didn’t even realize they were displaying symptoms of trauma. In response, she began administering PostTraumatic Stress Disorder assessments and discovered that every person who took the test had PTSD-related trauma symptoms.

To provide residents with the help they needed, she started educating the town’s adults about the mind-body connection so they would understand the physiology of how the brain responds to severe trauma. From experience she knew that verbal processes shut down for many people because the horror of a situation is often too much for the human system to conceptualize.

The best way to break through that barrier is to use therapies that involve art and the creative process. Scientifically, this type of therapy can actually build a connection in the brain that allows people to access extreme emotions and begin the healing process.

Within four months of the tragedy, Willcox opened an Emerald Sketch studio in Newtown – the first mental health program launched directly to respond to the shooting. Hundreds of town residents, from ages 3 to in their 70s, have worked with the studio’s art therapists since the December 2012 shootings, and Willcox expects to be helping residents for several more years.

Everyone is different, and there is no one-size-fits-all grief reaction and recovery process. There’s no timeline that everyone follows when healing for a mass tragedy.

Newtown resident David Brooker was working just down the street on the day of the shooting. For him, art therapy provided an outlet to express his grief, anger and more.

“There is no playbook for how you should feel, so it provided an environment where I could yell, scream, cry, be happy, be sad … whatever,” Brooker said. “Everyone feels the loss differently and with different gravity, so being able to completely be myself creating art gave me a way to find my own path. Most of the painting I did in the weeks after (the) massacre was total garbage, but it helped me get to a place - a place you don’t even know exists at the moment, a place of healing.”

With millions of dollars flooding into the community as donations after the shooting, the area’s Community Foundation surveyed residents to determine how they wanted the money spent. In addition to assistance for the victims’ families, the top priority was mental health counseling.

Willcox’s initial response was funded through the community and private donations, and she actively sought outreach opportunities in people’s homes, in the library, in churches and in other sites around the area. Eventually, the Newtown Recovery and Resiliency Team was established, and The Resiliency Center of Newtown opened. This non-profit continues operating today - providing free, long-term therapy services to residents still working through trauma related to the school shootings.

By giving residents a creative outlet and therapy that uses art, they were able to confront the trauma, identify issues in a safe environment and develop a plan for healing. Now as art therapy is established in Newtown, and so much knowledge on what works has been gained Willcox is visiting Charleston to share what helps people of any age and how to access your support needed.