Top 10: Elephant, Piggie and Pigeon helped kids and families make it through 2020 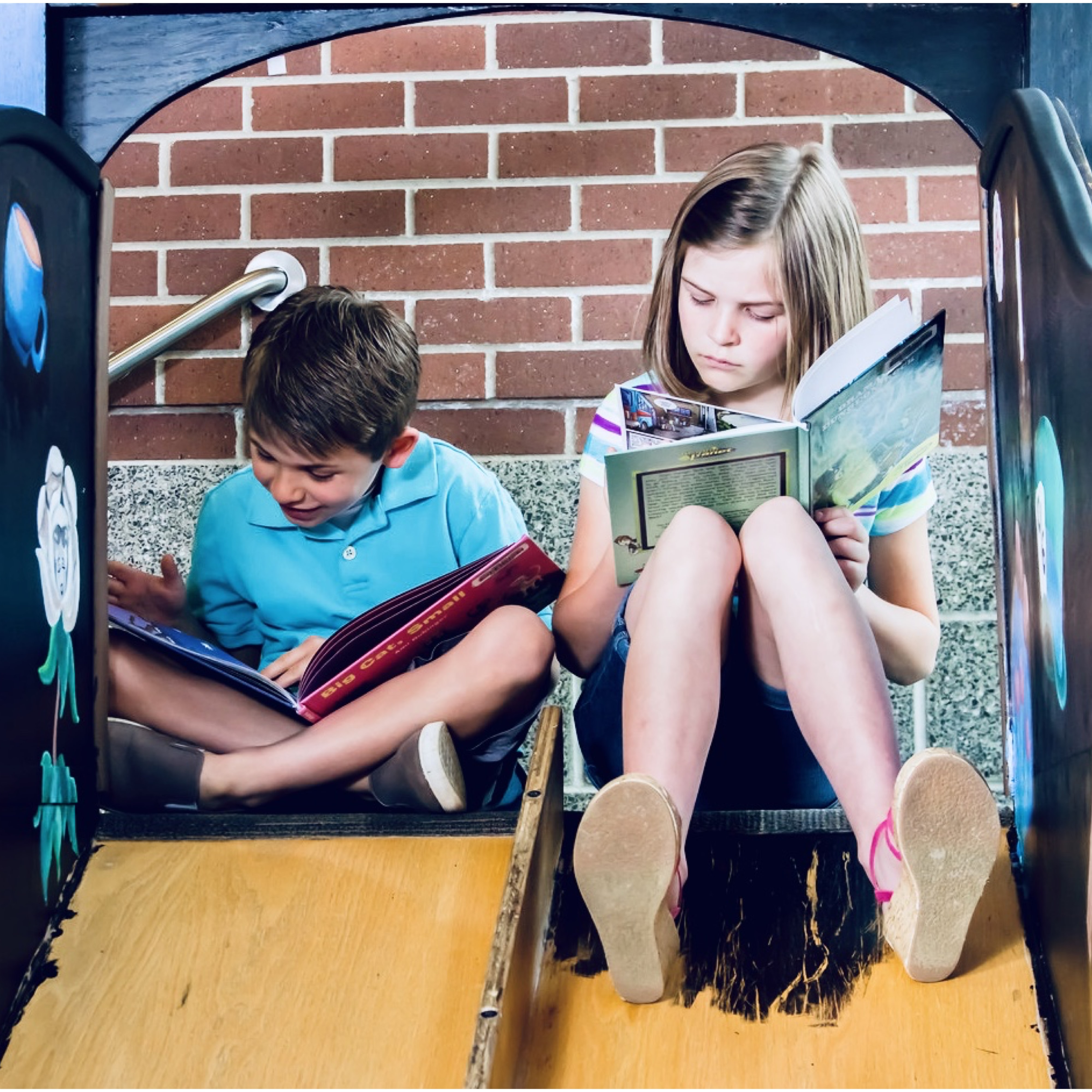 It was no surprise to see Mo Willems show up multiple times on this year's list of most circulated children's books in the CCPL collection. What is surprising is how few check-outs separated the most circulated book from the tenth most circulated: just 40 check outs!

Have these made it onto your child's reading list? Have you read them to your children? Reading to children starts them on an early path to literacy and gives them 1 million more words than those kids whose parents don't read to them. Learn more here.

I Will Surprise My Friend! by Mo Willems

Squirrel plays a big role in Elephant and Piggie's next adventure, I Will Surprise My Friend. He surprises his friend by hiding behind a tiny rock and yelling, Boo! The squirrels have such fun that Elephant and Piggie decide to try it too, but alas, surprising each other, when both know a surprise is coming, isn't that easy. As always in this series, the combination of simple text and mischievous art will satisfy beginning readers and leave them eager to polish their skills and move toward more challenging books.

Tacos are high on the list of dragon-friendly foods. Who knew? There is, however, a major qualification: the salsa must be mild ( even a speck of hot pepper makes a dragon snort sparks ). Rubin and Salmieri, the creators of Those Darn Squirrels! (2008), offer up a how-to guide to throwing one heck of a dragons' taco party. First, you'll need tacos pantloads of tacos and mild salsa, of course. Then, throw in a few decorations (taco-shaped balloons will work) and some music and voila. Unfortunately, in this tale, someone didn't read the fine print on the Totally Mild Salsa jar, and the hosts are in for a toasty surprise. The slight story meanders a bit, but the humor is helped along by Salmieri's cartoonish watercolor, gouache, and pencil illustrations, which extend the text through small details, from an I Love Tacos T-shirt to a No Spicy Salsa: A Guide to Dragon Cuisine cookbook. The whole thing is over-the-top ridiculousness, and kids will most likely warm to it for that very reason.

Are You Ready To Play Outside? by Mo Willems

Gerald the elephant and his friend Piggie are outdoors and ready to play when a drop of rain falls PLINK! on Piggie's head. Watching her high-spirited mood dive precipitously through annoyance toward despair, Gerald extends an ear to shelter her. Soon, though, two ecstatic worms cavorting in the rain inspire them to find happiness in wet-weather play. The characters quickly shifting moods provide plenty of laughs, as well as food for thought, in this amiable entry in the Elephant and Piggie beginning-reader series. Willems again combines simplicity and wit to create a child-pleasing text that works beautifully with the cartoon-style illustrations.

We Don't Eat Our Classmates! by Ryan T. Higgins

The first day of school is coming, and Penelope, an orange T. rex with the air of a squishy stuffed animal, is nervous about making friends. But her lunch of 300 sandwiches is packed, and her backpack, featuring delicious ponies, is ready to go. Sensing a theme? Penelope thinks with her stomach a trait that gets her into trouble when she discovers that her classroom is populated entirely by tasty, tasty children. Penelope promptly eats them all. She spits them out, but it's a little hard to make friends after that. Her dad tries to explain why people don't like being eaten, but it's not until Penelope makes a lonely attempt to befriend the classroom goldfish that she truly understands. The students in Penelope's class are diverse in skin tone and background: one student wears a hijab, another a yarmulke, and one, of course, is a dinosaur. Despite all the chomping, the bright colors and deceptively adorable dinosaurs make this a fun read rather than a scary one, with a hidden lesson about boundaries. Too much fun for a single read.

Harry Potter and the Sorcerer's Stone by J. K. Rowling

For the first time, J.K. Rowling's beloved Harry Potter books will be presented in lavishly illustrated full-color editions. Kate Greenaway-award-winning artist Jim Kay has created over 100 stunning illustrations, making this deluxe format a perfect gift as much for a child being introduced to the series, as for the dedicated fan.

Harry Potter has never been the star of a Quidditch team, scoring points while riding a broom far above the ground. He knows no spells, has never helped to hatch a dragon, and has never worn a cloak of invisibility.

All he knows is a miserable life with the Dursleys, his horrible aunt and uncle, and their abominable son, Dudley -- a great big swollen spoiled bully. Harry's room is a tiny closet at the foot of the stairs, and he hasn't had a birthday party in eleven years.

But all that is about to change when a mysterious letter arrives by owl messenger: a letter with an invitation to an incredible place that Harry -- and anyone who reads about him -- will find unforgettable.

In this humorous outing, Gerald the elephant and Piggie debate whether or not "elephants can dance." Gerald, who is convinced that he cannot (he tells Piggie to look it up in the "What Elephants Can Do" book) decides to give it a go nonetheless. Results are mixed, with Gerald basically doing the opposite of each instruction. Willems's characteristically sparse cartoon images and the use of speech balloons portray the comical dilemma with clarity, making it an ideal pick for early readers.

Pigeon is back, in all of his indignant, passive-aggressive glory, overwrought this time at one gross injustice: a cute little duckling is now on the scene and has been rewarded a cookie (with nuts) for doing nothing more than asking for it politely. Pigeon pulls out all of the usual pigeon stops coy glances, cartwheels, and crocodile tears in the hopes of securing a cookie for himself . . . and it works! The duckling shares. As with the other titles in the Pigeon series, simple pencil drawings on pale, blank backgrounds focus our attention on the characters' interactions. Willems has an extraordinary ability to convey immediate, deep characterization with a few deft strokes. He knows, too, how to spread the action across a picture book, carefully managing the panels and page turns to ramp up the drama. Fans will delight at another outing, and the protagonist's indelible pigeonality will welcome newcomers to the club. Pigeon is a beloved character, and his legions of fans will clamor for this, the seventh Pigeon book from hugely popular, award-winning Willems.

There Is A Bird On Your Head! by Mo Willems

Beginning readers familiar with Willems's books will recognize his distinctive humor and illustrative style in these stories. When Piggie receives her first invitation to a party, she asks Gerald to join her and relies on his advice-because he "knows" parties-in order to prepare for the big event. The elephant, however, has a tendency to overanalyze, so he prepares them both for any contingency-a fancy/pool/costume party. Piggie's expressive features show her questions about their attire, but the friends set off bedecked in flippers, masks, top hat, pearl earrings, cowboy hat, and evening dress. Imagine her surprise when they find all the other guests as lavishly overdressed as they are. In the second title, Gerald learns that there are worse things than a bird on your head, namely, two love birds, a nest, and three hatchlings. With the help of Piggie, he is finally able to ask them to move, but, as the final page reveals, they have become her problem. Both books use speech bubbles-gray ones for Gerald, pink for Piggie-to tell the entire story. This feature is a nice touch that facilitates paired/choral readings. The conversation between the friends flows smoothly and allows beginning readers to practice expression as they read. These appealing titles will tickle the funny bones of children and are sure to become favorites.

Don't Let the Pigeon Stay Up Late! by Mo Willems

In look and premise, this follows previous books about that persnickety pigeon whose actions resemble those of young children. Kids are invited to make sure that the pigeon doesn't stay up late. But the pigeon has his own ideas on the matter: First of all, I'm not even tired, he proclaims. On each successive page, a balloon of text comes up with ever more reasons why the pigeon shouldn't be coerced into bed (I hear there's a good show about birds on TV tonight. Should be very educational ). Then come the familiar questions: Can I have a glass of water? At one point he drags out his stuffed rabbit (looking suspiciously like Knuffle Bunny), who, the pigeon insists, wants to stay up. But then a yawn overtakes the bird, even though he insists he is just stretching--and, well, you know the rest. Fans of the pigeon will welcome him back and wait with anticipation to see what he can't do next.

Don't Let the Pigeon Drive the Bus! by Mo Willems

In his winning debut, Willems finds the preschooler in a pigeon: a cajoling, tantrum-throwing, irresistible bird. I've got to leave for a little while, says a uniformed bus driver as he strolls off the opening pages. I thought he'd never leave, says the big-eyed pigeon as he marches onto the next spread and begins his campaign to drive the bus. His tactics, addressed to an unseen audience, are many: he reasons (I tell you what: I'll just steer ); he whines (I never get to do anything! ); he's creative (Let's play \lquote Drive the Bus'! I'll go first ); he bargains (C'mon!ust once around the block! ). Finally he erupts in a feather-flying tantrum, followed by a drooping sulk that ends only when a truck arrives, and new road fantasies begin. Librarians may struggle with the endpapers, which contain important story content, but the design is refreshingly minimal, focusing always on the pigeon; he's the only image on nearly every earth-toned spread. Willems is a professional animator, and each page has the feel of a perfectly frozen frame of cartoon footage--action, remarkable expression, and wild humor captured with just a few lines. Preschoolers will howl over the pigeon's dramatics, even as they recognize that he wheedles, blows up, and yearns to be powerful just like they do.