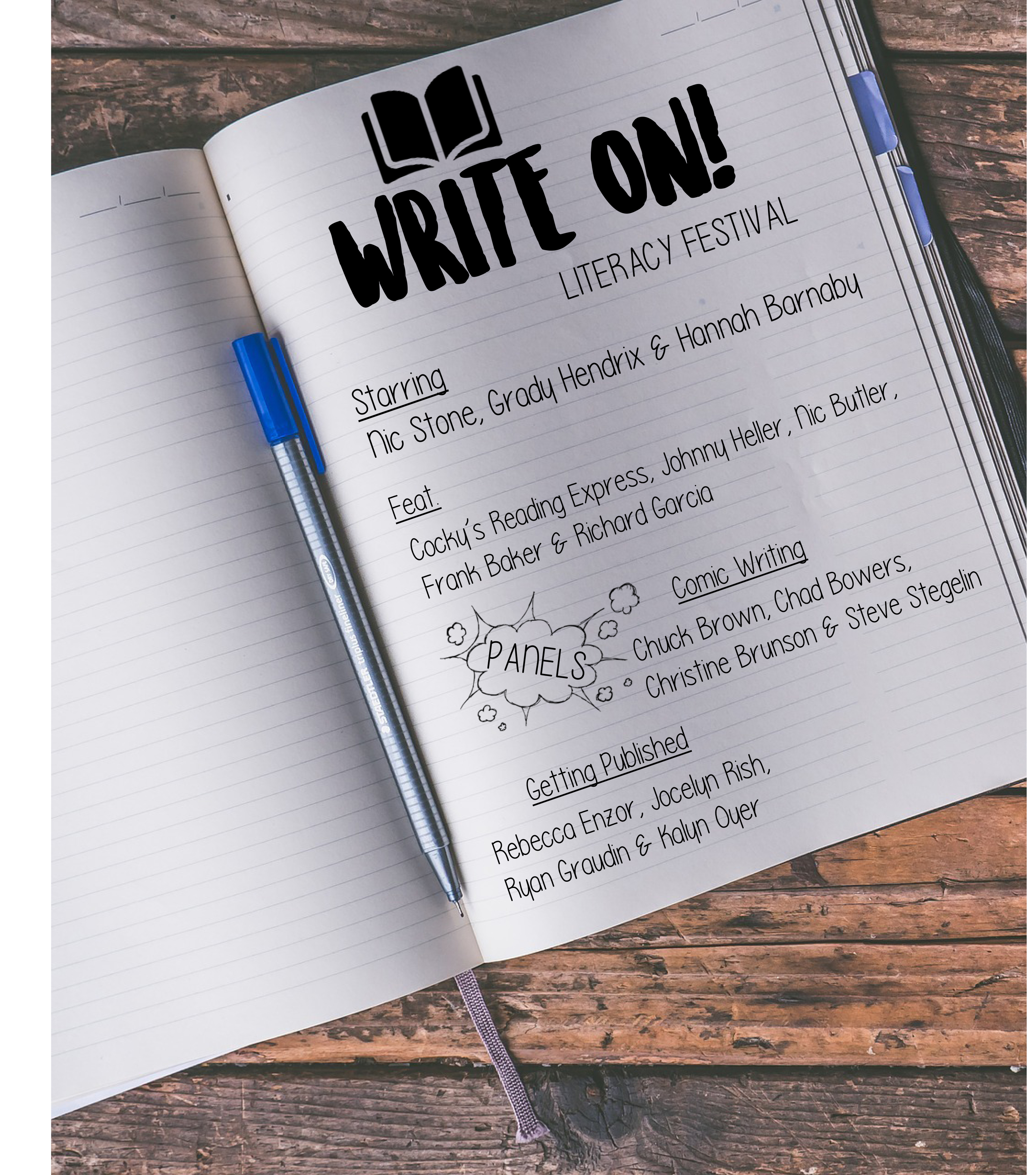 Exploring the world of literacy is not just for kids. Join us between Saturday, July 28 and Saturday, August 4 for a weeklong, system-wide series of writing workshops, author talks, and creative programs that are all ages or geared toward older young adults and adults. The week's events include:

Nic Stone is a native of Atlanta and a Spelman College graduate. After working extensively in teen mentoring and living in Israel for a few years, she returned to the United States to write full-time. Dear Martin, her first novel, is loosely based on a series of true events involving the shooting deaths of unarmed African American teenagers. Shaken by the various responses to these incidents—and to the pro-justice movement that sprang up as a result—Stone began the project in an attempt to examine current affairs through the lens of Dr. Martin Luther King Jr.’s teachings.

In the early Seventies, three books changed horror forever: Rosemary's Baby, The Exorcist, and The Other. The first horror novels to hit bestseller lists since 1940, they opened the floodgates for an avalanche of horror paperbacks to pour onto supermarket shelves throughout the Seventies and Eighties until Silence of the Lambs slit the genre's throat in the early Nineties. Writer Grady Hendrix delivers a mind-melting oral history of this now forgotten world of Nazi leprechauns, skeleton doctors, killer crabs, killer jellyfish, killer babies, pretty much killer everything. Prepare yourself for a tour of this long-lost universe of terror that lurked behind the lurid, foil-embossed, die-cut covers of...the Paperbacks from Hell!!!!

Grady Hendrix is the author of the novels Horrorstör, about a haunted IKEA, and My Best Friend’s Exorcism, which is basically “Beaches” meets “The Exorcist.” His book Paperbacks from Hell won the Stoker Award in 2017 for Distinguished Achievement in Non-Fiction. He’s written about machine gun collectors, ninjas, the Confederate flag, and Jean-Claude Van Damme for Playboy, Variety, Slate, and the New York Post, among others. His latest novel is “We Sold Our Souls,” a heavy metal horror epic due out in September from Quirk Books.

Johnny Heller is an award-winning actor and teacher with over 25 years of experience in the industry in voiceover, stage, television, and stand-up comedy. He has narrated over 500 titles for adults, young adults, and children, working in almost every genre. Heller is a 2005 and 2009 Audie Award winner, a double nominee in 2015, a 2014 nominee for Best Male Narrator, and a double nominee in 2012. He was named a Best Voice for 2008–2011 and 2014, and he was a Publishers Weekly Listen-Up Award winner for 2008–2013. Heller has won more than 20 Earphones Awards and AudioFile named him one of the top 50 voices of the 20th century.

ConNECKted is a collective of artists, educators and activists.  Their last project, "ConNECKted  Imaginings for Truth and Reconciliation" (2015-2017) challenged processes of collaboration in the visual arts and practiced equitable community involvement.  They are now working on "conNECKtedTOO" which invites very small, "tiny businesses," to envision with them how arts and culture in/with community can encourage economic development and meet common needs in the area.

At the literacy festival, ConNECKted will engage artists, activists, business owners and members of the community about issues of exclusion and inequities in economics, education, housing and business by collecting stories and envisioning alternatives.

Poetry Workshop with Richard Garcia of the Poetry Society of South Carolina
12:15-1 p.m.

The workshop will consist of a writing exercise or two where guidance, prompts and models will be provided. Novices and experienced writers will find themselves equally at home. We will also enjoy reading some poems by contemporary South Carolina poets.

In the years between the founding of the Carolina colony in 1670 and the beginning of integrated public education in the 1960s, a number of cultural factors conspired to keep literacy rates low in the Lowcountry. Join CCPL's historian, Dr. Nic Butler, for an overview of historical attitudes and obstacles that impacted the majority of the local population, including females, African Americans, and immigrants.

Frank W. Baker is a national media literacy educator, who has conducted hundreds of professional development workshops for educators across the United States. He maintains the popular Media Literacy Clearinghouse web site and writes a regular column on media literacy at www.middleweb.com. He is a consultant to the Writing Improvement Network in South Carolina and has written teaching standards in SC for both ELA and Visual & Performing Arts. Join this nationally recognized media literacy guru for an engaging talk on media literacy and its importance in a world of fake news and misinformation.

Kick off the Literacy Festival with bookish jams from Charleston’s favorite band, The V-Tones.

In addition to the scheduled activities listed below, stop by the Children’s Department anytime during the Literacy Festival to participate in a story walk.

Did you know that there are tricks to writing picture books? Unlike magicians, writers love to share their secrets. This program will introduce young readers to the basics of story structure and explore the process of creating an original story using patterns, outcome predictions, and character types.

Hannah Barnaby has worked as a children's book editor, a bookseller, and a teacher of writing for children and young adults. She holds an MA in children's literature from Simmons College and an MFA in writing for children and young adults from Vermont College. Her first novel, “Wonder Show,” was a William C. Morris nominee. Hannah lives in Charlottesville, Virginia, with her family.

Cocky's Reading Express™ is the University of South Carolina’s literacy outreach program. USC students travel the state with their friend, Cocky, visiting elementary schools and libraries across South Carolina. The students read to the children, and Cocky helps the children understand the importance of life-long reading. Cocky will be available for photos after the storytimes.

The place to buy books and take a selfie with your favorite Literacy Festival author. Book sales handled by Blue Bicycle Books.

Learn about the various platforms for publication across genres, topics, and styles.

Ryan Graudin was born in Charleston, SC with a severe case of wanderlust. When she's not traveling, she's busy photographing weddings, writing, and spending time with her husband and wolf-dog. She is the author of the acclaimed Young Adult novels The Walled City, Wolf by Wolf, Blood for Blood, and Invictus.

Jocelyn Rish is a local freelance writer whose credits include articles for MTV News. One of the winners of the 2008 South Carolina Fiction Project and a winner of the 2009 Highlights fiction contest, her biggest success so far is the screenplay she wrote with her brother, which won a generous grant from the SC Film Commission to fund the production of their movie.

Rebecca Enzor is an analytical chemist in Charleston, SC, where she lives with her husband, two dogs, three cats, and sometimes chickens. Her articles on writing science in science fiction can be found in the upcoming Putting the Science in Fiction anthology, out October 16th from Writer’s Digest Books. Rebecca studied fisheries biology in college, and electrocuted herself collecting fish in a river, which inspired several key scenes in her debut novel, Speak the Ocean, out in 2019 with Reuts Publications.

Kalyn Oyer is a music maniac (she's played piano since age 4 and grew up on her dad's classic rock CD collection) and a word nerd (she's wanted to be a writer since 4th grade when she wrote her first "novel" about a burro named Browny). She since has transitioned into the journalism field, combining her love for music and writing as an arts and entertainment writer at The Post and Courier/Charleston Scene. Before, she was a freelance music journalist for the Charleston City Paper, Elmore Magazine, mdwn, Scene SC, The Free Times and more. She loves writing songs during thunderstorms and poetry in the sunshine.

Join some of the best comic writers and illustrators from South Carolina in conversation about their experiences and inspirations.

Chad Bowers writes comics, some of which are pretty good. His credits include Youngblood at Image Comics and X-Men '92, Deadpool, Guardians of the Galaxy, and currently Darkhawk at Marvel Comics. He lives in South Carolina with his wife and two sons, and spends way too much time thinking about “Legion” or “Superheroes.”

Christine Brunson is a comic book creator who provides the color for series such as Alterna Comics’ Amazing Age, Xigency Studios’ Amazonia, and Matthew David Smith’s Simon Says. She made her debut as co-creator, writer, and colorist for the web comic “Undead Norm” in 2012. Her latest work is Bittersweet Sentinels, which she wrote and created with artist JD Benefield.

West Ashley-resident Steve Stegelin is the editorial cartoonist and illustrator at Charleston City Paper, where he’s documented the hypocrisy of politicians and the shenanigans of Charleston’s drunks and criminals for the past 14+ years. When not at the drawing board for the alt.weekly, Steve works with Run Riot Media on Hart Jeffers’ self-published comic book SOL, where he serves as the series' editor and letterer and contributes its serial backup, Mort: Space Badger. Before that, Steve was best known for the cynical, grunge-infused social commentary of his 90s-era, creator-owned indie comic Boondoggle.

Don’t miss the Literacy Festival green screen near the Young Adult Department, where you can transport yourself to favorite book-inspired world and get photographic evidence of your journey to new literary dimensions.

Explore literacy in all its connotations by checking out these interactive stations placed all over the library. Pick up a map at the Information table in the lobby. When you visit a booth, ask for a stamp on your map. Once you visit every booth and collect all the stamps, bring your map back to the Information table to win a prize!

Thank you to these partnering organizations for hosting booths and activities:

Children’s Museum of the Lowcountry

Lowcountry Initiative for the Literary Arts